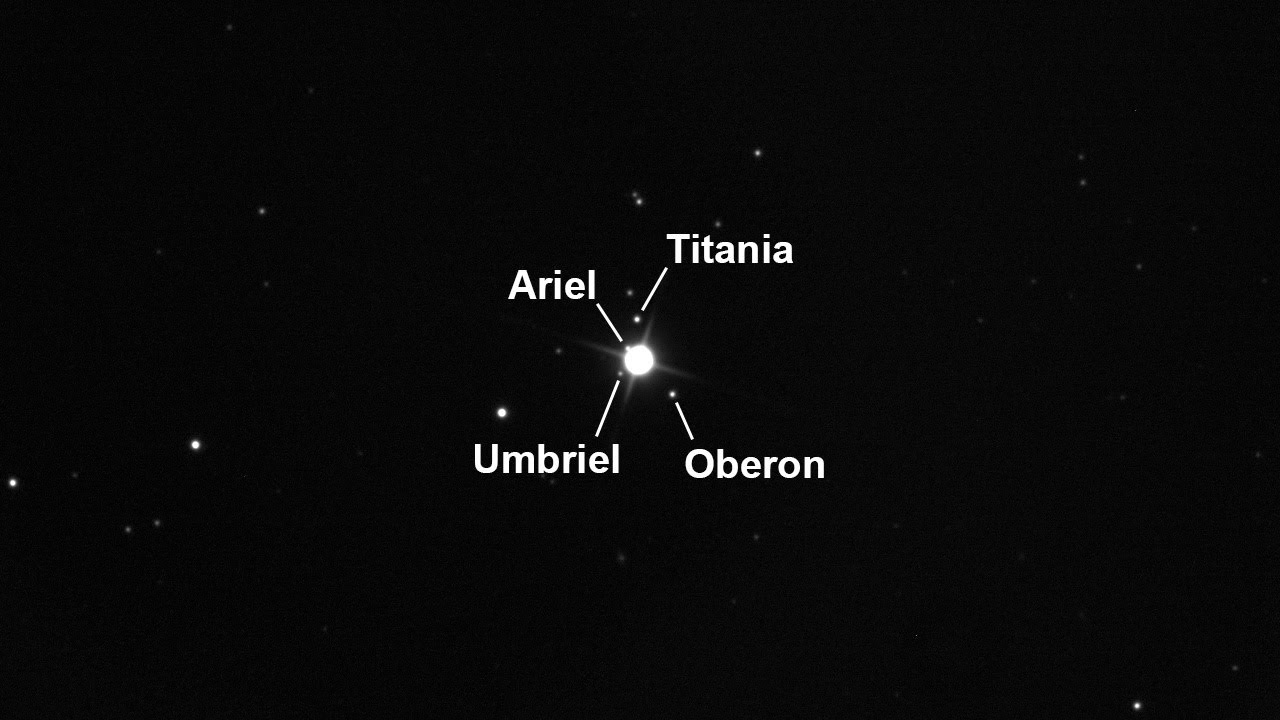 What’s that moving across the sky? A planet just a bit too faint to see with the unaided eye: Uranus. The gas giant out past Saturn was tracked earlier this month near opposition — when it was closest to Earth and at its brightest. The featured video captured by the Bayfordbury Observatory in Hertfordshire, UK is a four-hour time-lapse showing Uranus with its four largest moons in tow: Titania, Oberon, Umbriel and Ariel. Uranus’ apparent motion past background stars is really dominated by Earth’s own orbital motion around our Sun. The cross seen centered on Uranus is called a diffraction spike and is caused by light diffracting around the four arms that hold one of the telescope‘s mirrors in place. The rotation of the diffraction spikes is not caused by the rotation of Uranus but, essentially, by the rotation of the Earth. During the next few months Uranus itself will be visible with binoculars, but, as always, to see its moons will require a telescope.

from NASA https://ift.tt/3d4C8aC
via IFTTT

What created the strange spiral structure on the upper left? No one is sure, although it is likely related to a star in a binary star system entering the planetary nebula phase, when its outer atmosphere is ejected. The huge spiral spans about a third of a light year across and, winding four or five complete turns, has a regularity that is without precedent. Given the expansion rate of the spiral gas, a new layer must appear about every 800 years, a close match to the time it takes for the two stars to orbit each other. The star system that created it is most commonly known as LL Pegasi, but also AFGL 3068 and IRAS 23166+1655. The featured image was taken in near-infrared light by the Hubble Space Telescope. Why the spiral glows is itself a mystery, with a leading hypothesis being illumination by light reflected from nearby stars.

from NASA https://ift.tt/3D6qPJo
via IFTTT

This high cliff occurs not on a planet, not on a moon, but on a comet. It was discovered to be part of the dark nucleus of Comet Churyumov-Gerasimenko (CG) by Rosetta, a robotic spacecraft launched by ESA that rendezvoused with the Sun-orbiting comet in 2014. The ragged cliff, as featured here, was imaged by Rosetta in 2014. Although towering about one kilometer high, the low surface gravity of Comet CG would likely make it an accessible climb — and even a jump from the cliff survivable. At the foot of the cliff is relatively smooth terrain dotted with boulders as large as 20 meters across. Data from Rosetta indicates that the ice in Comet CG has a significantly different deuterium fraction — and hence likely a different origin — than the water in Earth’s oceans. Rosetta ended its mission with a controlled impact onto Comet CG in 2016. Comet CG has just completed another close approach to Earth and remains visible through a small telescope.

from NASA https://ift.tt/3FO2dXu
via IFTTT

Big, beautiful spiral galaxy M101 is one of the last entries in Charles Messier’s famous catalog, but definitely not one of the least. About 170,000 light-years across, this galaxy is enormous, almost twice the size of our own Milky Way. M101 was also one of the original spiral nebulae observed by Lord Rosse’s large 19th century telescope, the Leviathan of Parsontown. Assembled from 51 exposures recorded by the Hubble Space Telescope in the 20th and 21st centuries, with additional data from ground based telescopes, this mosaic spans about 40,000 light-years across the central region of M101 in one of the highest definition spiral galaxy portraits ever released from Hubble. The sharp image shows stunning features of the galaxy’s face-on disk of stars and dust along with background galaxies, some visible right through M101 itself. Also known as the Pinwheel Galaxy, M101 lies within the boundaries of the northern constellation Ursa Major, about 25 million light-years away. 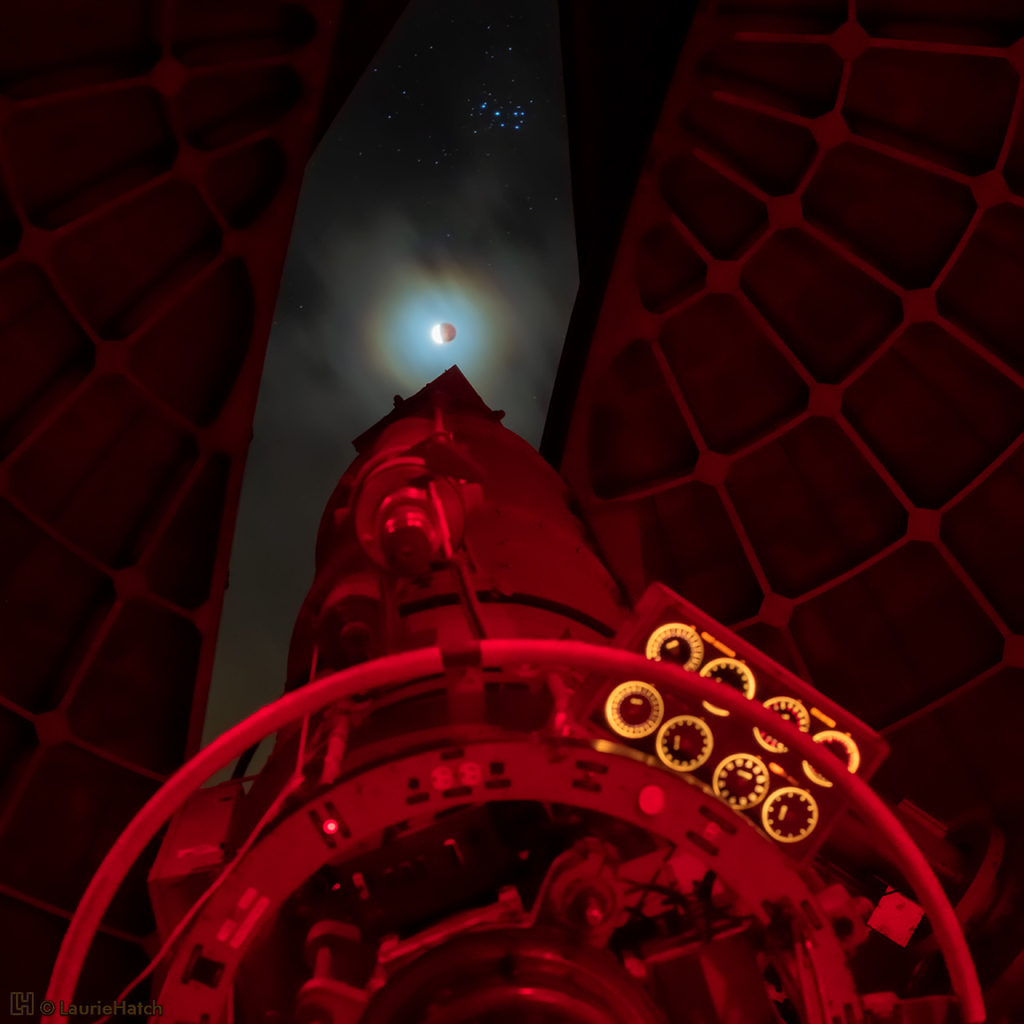 Rain clouds passed and the dome of the Lick Observatory’s 36 inch Great Refractor opened on November 19. The historic telescope was pointed toward a partially eclipsed Moon. Illuminated by dim red lighting to preserve an astronomer’s night vision, telescope controls, coordinate dials, and the refractor’s 57 foot long barrel were captured in this high dynamic range image. Visible beyond the foreshortened barrel and dome slit, growing brighter after its almost total eclipse phase, the lunar disk created a colorful halo through lingering clouds. From the open dome, the view of the clearing sky above includes the Pleiades star cluster about 5 degrees from Moon and Earth’s shadow.

from NASA https://ift.tt/3r9xa4s
via IFTTT

Shaped like a cone tapering into space, the Earth’s dark central shadow or umbra has a circular cross-section. It’s wider than the Moon at the distance of the Moon’s orbit though. But during the lunar eclipse of November 18/19, part of the Moon remained just outside the umbral shadow. The successive pictures in this composite of 5 images from that almost total lunar eclipse were taken over a period of about 1.5 hours. The series is aligned to trace part of the cross-section’s circular arc, with the central image at maximum eclipse. It shows a bright, thin sliver of the lunar disk still beyond the shadow’s curved edge. Of course, even within the shadow the Moon’s surface is not completely dark, reflecting the reddish hues of filtered sunlight scattered into the shadow by Earth’s atmosphere.

from NASA https://ift.tt/3xzpDNL
via IFTTT

Have you ever seen the Pleiades star cluster? Even if you have, you probably have never seen it as large and clear as this. Perhaps the most famous star cluster on the sky, the bright stars of the Pleiades can be seen without binoculars from even the depths of a light-polluted city. With a long exposure from a dark location, though, the dust cloud surrounding the Pleiades star cluster becomes very evident. The featured exposure, taken from Florida, USA, covers a sky area several times the size of the full moon. Also known as the Seven Sisters and M45, the Pleiades lies about 400 light years away toward the constellation of the Bull (Taurus). A common legend with a modern twist is that one of the brighter stars faded since the cluster was named, leaving only six of the sister stars visible to the unaided eye. The actual number of Pleiades stars visible, however, may be more or less than seven, depending on the darkness of the surrounding sky and the clarity of the observer’s eyesight.

from NASA https://ift.tt/3DODzWm
via IFTTT 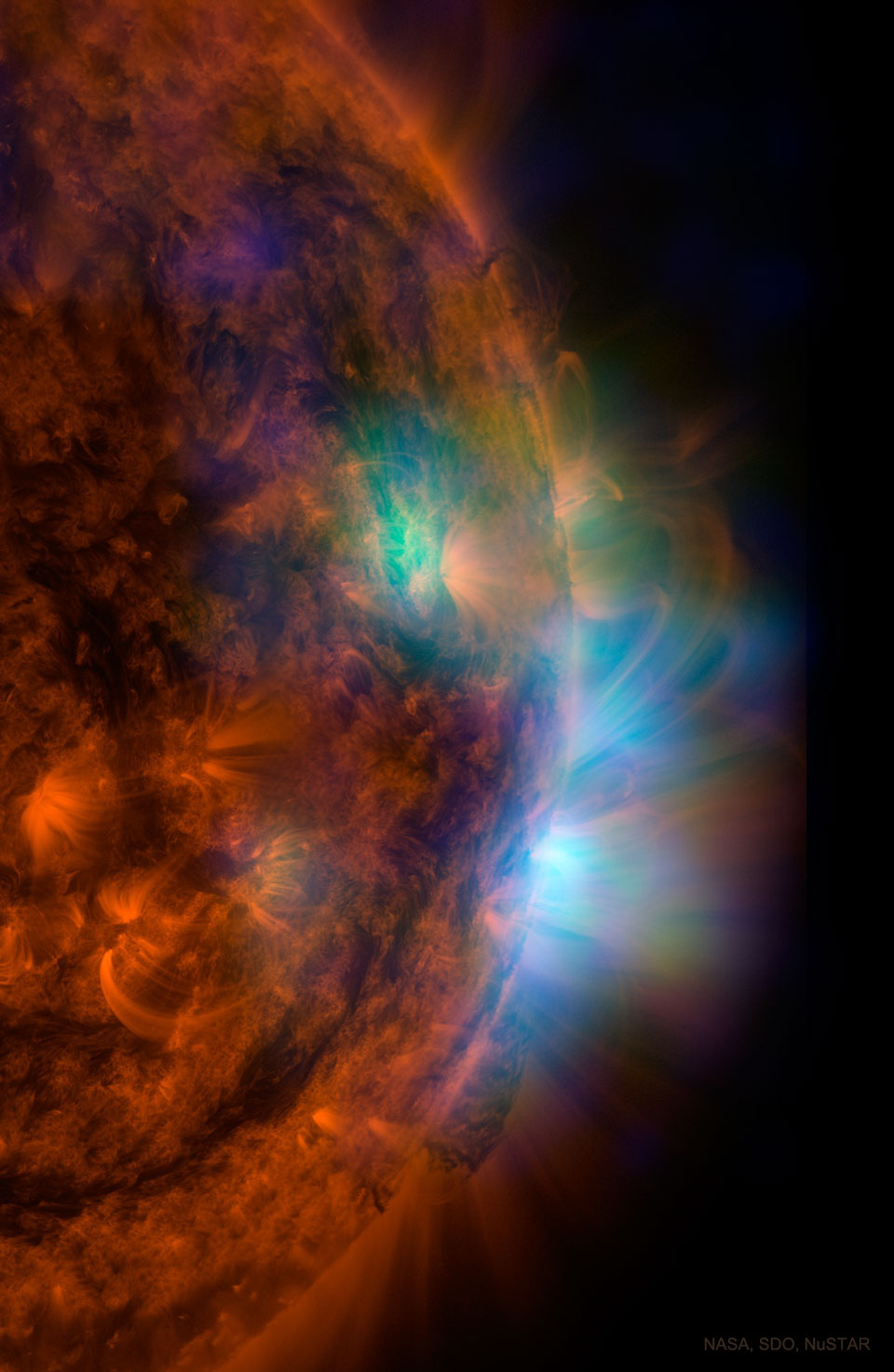 Why are the regions above sunspots so hot? Sunspots themselves are a bit cooler than the surrounding solar surface because the magnetic fields that create them reduce convective heating. It is therefore unusual that regions overhead — even much higher up in the Sun’s corona — can be hundreds of times hotter. To help find the cause, NASA directed the Earth-orbiting Nuclear Spectroscopic Telescope Array (NuSTAR) satellite to point its very sensitive X-ray telescope at the Sun. Featured here is the Sun in ultraviolet light, shown in a red hue as taken by the orbiting Solar Dynamics Observatory (SDO). Superimposed in false-colored green and blue is emission above sunspots detected by NuSTAR in different bands of high-energy X-rays, highlighting regions of extremely high temperature. Clues about the Sun’s atmospheric heating mechanisms come from NuSTAR images like this and shed light on solar nanoflares and microflares as brief bursts of energy that may drive the unusual heating.

from NASA https://ift.tt/3l3FvTz
via IFTTT 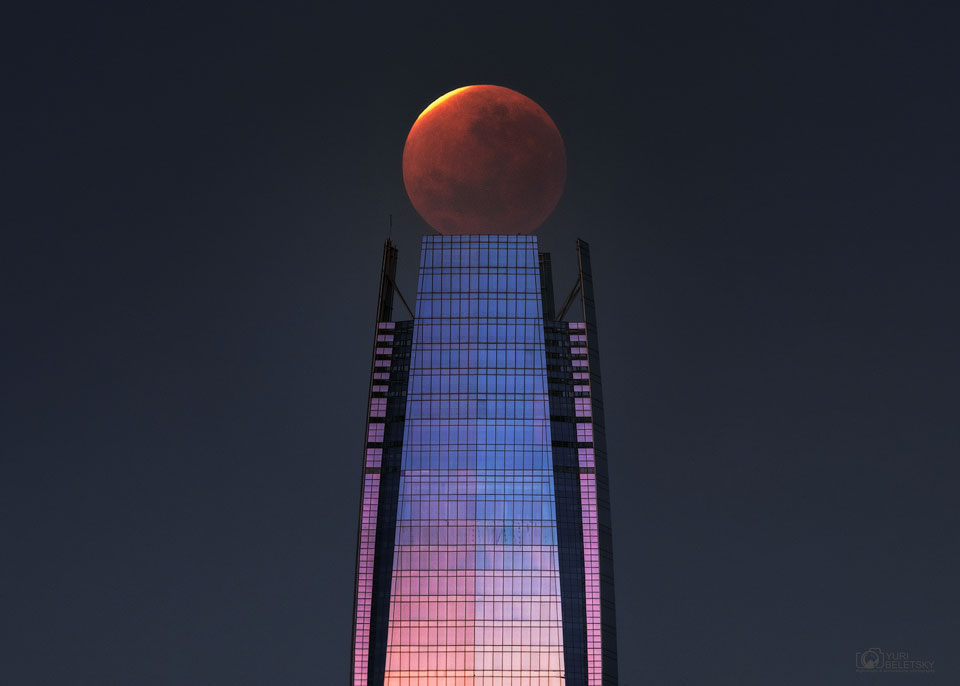 Why is the Moon on top of this building? Planning. It took the astrophotographer careful planning — including figuring out exactly where to place the camera and exactly when to take the shot — to create this striking superposition. The single image featured was taken in the early morning hours of November 19, near the peak of the partial lunar eclipse that was occurring as the Moon passed through the Earth’s shadow. At this time, almost the entire Moon — 99.1 percent of its area — was in the darkest part of the Earth’s shadow. The building is the Gran Torre Santiago building in Chile, the tallest building in South America. Although the entire eclipse lasted an impressive six hours, this image had to be taken within just a few seconds to get the alignment right — the Earth’s rotation soon moved the building out of alignment. The next Earth-Moon eclipse will be a total eclipse of the Sun that will occur on December 4 — but only be visible from the bottom of our world.

from NASA https://ift.tt/3xdTJ9k
via IFTTT 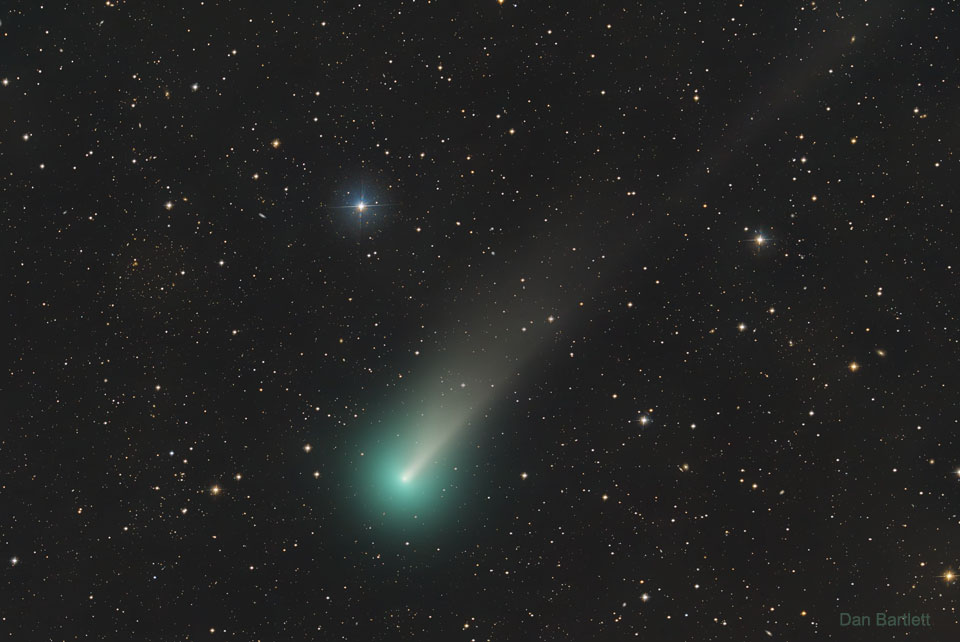 Here comes Comet Leonard. Comet C/2021 A1 (Leonard) was discovered as a faint smudge in January 2021 when it was out past Mars — but its orbit will take the giant shedding ice-ball into the inner Solar System, passing near both Earth and Venus in December before it swoops around the Sun in early January 2022. Although comets are notoriously hard to predict, some estimations have Comet Leonard brightening to become visible to the unaided eye in December. Comet Leonard was captured just over a week ago already sporting a green-tinged coma and an extended dust tail. The featured picture was composed from 62 images taken through a moderate-sized telescope — one set of exposures tracking the comet, while another set tracking the background stars. The exposures were taken from the dark skies above the Eastern Sierra Mountains, near June Lake in California, USA. Soon after passing near the Earth in mid-December, the comet will shift from northern to southern skies.

from NASA https://ift.tt/3kV7hS4
via IFTTT