In 46 BC Julius Caesar reformed the calendar system. Based on advice by astronomer Sosigenes of Alexandria, the Julian calendar included one leap day every four years to account for the fact that an Earth year is slightly more than 365 days long. In modern terms, the time it takes for the planet to orbit the Sun once is 365.24219 mean solar days. So if calendar years contained exactly 365 days they would drift from the Earth’s year by about 1 day every 4 years and eventually July (named for Julius Caesar himself) would occur during the northern hemisphere winter. By adopting a leap year with an extra day every four years, the Julian calendar year would drift much less. In 1582 Pope Gregory XIII provided the further fine-tuning that leap days should not occur in years ending in 00, unless divisible by 400. This Gregorian Calendar system is the one in wide use today. Of course, tidal friction in the Earth-Moon system slows Earth’s rotation and gradually lengthens the day by about 14 milliseconds per century. That means that leap days like today will not be necessary … about 4 million years from now.

from NASA https://ift.tt/39cQ9zs
via IFTTT

At sunset on December 6 a Rocket Lab Electron rocket was launched from a rotating planet. With multiple small satellites on board it departed on a mission to low Earth orbit dubbed Running Out of Fingers from Mahia Peninsula on New Zealand’s north island. The firey trace of the Electron’s graceful launch arc is toward the south in this southern sea and skyscape. Drifting vapor trails and rocket exhaust plumes catch the sunlight even as the sky grows dark though, the setting Sun still shinning at altitude along the rocket’s trajectory. Fixed to a tripod, the camera’s perspective nearly aligns the peak of the rocket arc with the South Celestial Pole, but no bright star marks that location in the southern hemisphere’s evening sky. Still, it’s easy to find at the center of the star trail arcs in the timelapse composite.

from NASA https://ift.tt/2VtfLUw
via IFTTT

The Sun is hidden by a horizon that runs across the middle in this two hemisphere view of Earth’s night sky. The digitally stitched mosaics were recorded from corresponding latitudes, one 29 degrees north and one 29 degrees south of the planet’s equator. On top is the northern view from the IAC observatory at La Palma taken in February 2020. Below is a well-matched southern scene from the ESO La Silla Observatory recorded in April 2016. In this projection, the Milky Way runs almost vertically above and below the horizon. Its dark clouds and and bright nebulae are prominent near the galactic center in the lower half of the frame. In the upper half, brilliant Venus is immersed in zodiacal light. Sunlight faintly scattered by interplanetary dust, the zodiacal light traces the Solar System’s ecliptic plane in a complete circle through the starry sky. Large telescope domes bulge along the inverted horizon from La Silla while at La Palma, multi-mirror Magic telescopes stand above center. Explore this two hemisphere night sky and you can also find the Andromeda Galaxy and the Large and Small Magellanic Clouds.

from NASA https://ift.tt/3cf8OMC
via IFTTT

This hot jupiter is doomed. Hot jupiters are giant planets like Jupiter that orbit much closer to their parent stars than Mercury does to our Sun. But some hot jupiters are more extreme than others. NGTS-10b, illustrated generically, is the closest and fastest-orbiting giant planet yet discovered, circling its home star in only 18 hours. NGTS-10b is a little larger than Jupiter, but it orbits less than two times the diameter of its parent star away from the star��������s surface. When a planet orbits this close, it is expected to spiral inward, pulled down by tidal forces to be eventually ripped apart by the star��������s gravity. NGTS-10b, discovered by researchers at the University of Warwick, is named after the ESO��������s Next Generation Transit Survey, which detected the imperiled planet when it passed in front of its star, blocking some of the light. Although the violent demise of NGTS-10b will happen eventually, we don’t yet know when.

from NASA https://ift.tt/2SYL5J0
via IFTTT

Yes, but could you get to work on time if the Moon looked like this? As the photographer was preparing to drive to work, refraction, reflection, and even diffraction of moonlight from millions of falling ice crystals turned the familiar icon of our Moon into a menagerie of other-worldly halos and arcs. The featured scene was captured with three combined exposures two weeks ago on a cold winter morning in Manitoba, Canada. The colorful rings are a corona caused by quantum diffraction by small drops of water or ice near the direction of the Moon. Outside of that, a 22-degree halo was created by moonlight refracting through six-sided cylindrical ice crystals. To the sides are moon dogs, caused by light refracting through thin, flat, six-sided ice platelets as they flittered toward the ground. Visible at the top and bottom of the 22-degree halo are upper and lower tangent arcs, created by moonlight refracting through nearly horizontal hexagonal ice cylinders. A few minutes later, from a field just off the road to work, the halo and arcs had disappeared, the sky had returned to normal — with the exception of a single faint moon dog.

from NASA https://ift.tt/2SWMxvJ
via IFTTT

How did we get here? Click play, sit back, and watch. A computer simulation of the evolution of the universe provides insight into how galaxies formed and perspectives into humanity’s place in the universe. The Illustris project exhausted 20 million CPU hours in 2014 following 12 billion resolution elements spanning a cube 35 million light years on a side as it evolved over 13 billion years. The simulation tracks matter into the formation of a wide variety of galaxy types. As the virtual universe evolves, some of the matter expanding with the universe soon gravitationally condenses to form filaments, galaxies, and clusters of galaxies. The featured video takes the perspective of a virtual camera circling part of this changing universe, first showing the evolution of dark matter, then hydrogen gas coded by temperature (0:45), then heavy elements such as helium and carbon (1:30), and then back to dark matter (2:07). On the lower left the time since the Big Bang is listed, while on the lower right the type of matter being shown is listed. Explosions (0:50) depict galaxy-center supermassive black holes expelling bubbles of hot gas. Interesting discrepancies between Illustris and the real universe have been studied, including why the simulation produced an overabundance of old stars.

from NASA https://ift.tt/2SRATCa
via IFTTT

A mere 11 million light-years away, Centaurus A is the closest active galaxy to planet Earth. Also known as NGC 5128, the peculiar elliptical galaxy is over 60,000 light-years across. A region spanning about 8,500 light-years, including the galaxy’s center (upper left), is framed in this sharp Hubble Space telescope close-up. Centaurus A is apparently the result of a collision of two otherwise normal galaxies resulting in a violent jumble of star forming regions, massive star clusters, and imposing dark dust lanes. Near the galaxy’s center, left over cosmic debris is steadily being consumed by a central black hole with a billion times the mass of the Sun. As in other active galaxies, that process likely generates the radio, X-ray, and gamma-ray energy radiated by Centaurus A.

from NASA https://ift.tt/3bW4DoZ
via IFTTT 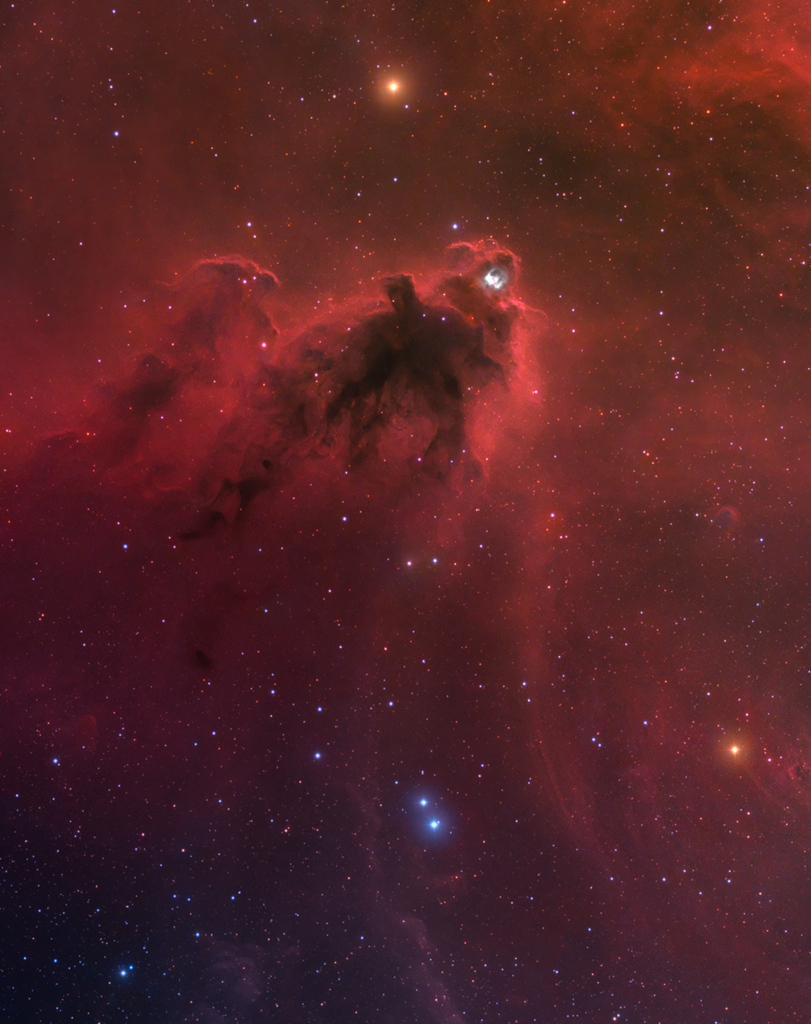 The silhouette of an intriguing dark nebula inhabits this cosmic scene. Lynds’ Dark Nebula (LDN) 1622 appears against a faint background of glowing hydrogen gas only visible in long telescopic exposures of the region. In contrast, the brighter reflection nebula vdB 62 is more easily seen, just above and right of center. LDN 1622 lies near the plane of our Milky Way Galaxy, close on the sky to Barnard’s Loop, a large cloud surrounding the rich complex of emission nebulae found in the Belt and Sword of Orion. With swept-back outlines, the obscuring dust of LDN 1622 is thought to lie at a similar distance, perhaps 1,500 light-years away. At that distance, this 1 degree wide field of view would span about 30 light-years. Young stars do lie hidden within the dark expanse and have been revealed in Spitzer Space telescope infrared images. Still, the foreboding visual appearance of LDN 1622 inspires its popular name, the Boogeyman Nebula.

from NASA https://ift.tt/37N4ZLs
via IFTTT

On February 18, as civil twilight began in northern New Mexico skies, the International Space Station, a waning crescent Moon, and planet Mars for a moment shared this well-planned single field of view. From the photographer’s location the sky had just begun to grow light, but the space station orbiting 400 kilometers above the Earth was already bathed in the morning sunlight. At 6:25am local time it took less than a second to cross in front of the lunar disk moving right to left in the composited successive frames. At the time, Mars itself had already emerged from behind the Moon following its much anticipated lunar occultation. The yellowish glow of the Red Planet is still in the frame at the upper right, beyond the Moon’s dark edge.

from NASA https://ift.tt/2T0hjCI
via IFTTT

Why does this galaxy spin so fast? To start, even identifying which type of galaxy UGC 12591 is difficult — featured on the lower left, it has dark dust lanes like a spiral galaxy but a large diffuse bulge of stars like a lenticular. Surprisingly observations show that UGC 12591 spins at about 480 km/sec, almost twice as fast as our Milky Way, and the fastest rotation rate yet measured. The mass needed to hold together a galaxy spinning this fast is several times the mass of our Milky Way Galaxy. Progenitor scenarios for UGC 12591 include slow growth by accreting ambient matter, or rapid growth through a recent galaxy collision or collisions — future observations may tell. The light we see today from UGC 12591 left about 400 million years ago, when trees were first developing on Earth.

from NASA https://ift.tt/326jqJe
via IFTTT