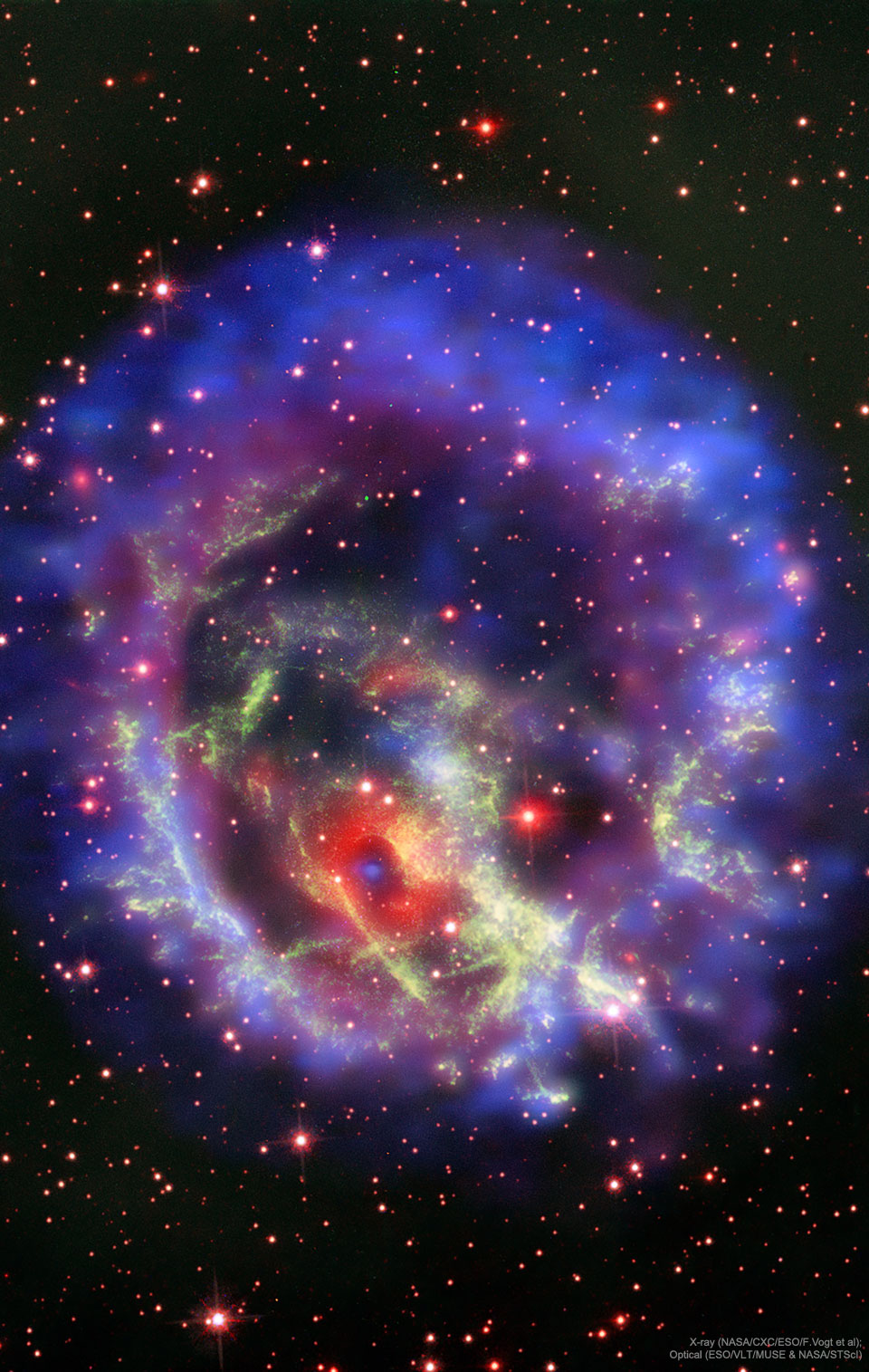 Why is this neutron star off-center? Recently a lone neutron star has been found within the debris left over from an old supernova explosion. The “lonely neutron star” in question is the blue dot at the center of the red nebula near the bottom left of E0102-72.3. In the featured image composite, blue represents X-ray light captured by NASA’s Chandra Observatory, while red and green represent optical light captured by ESO‘s Very Large Telescope in Chile and NASA’s Hubble Space Telescope in orbit. The displaced position of this neutron star is unexpected since the dense star is thought to be the core of the star that exploded in the supernova and created the outer nebula. It could be that the neutron star in E0102 was pushed away from the nebula’s center by the supernova itself, but then it seems odd that the smaller red ring remains centered on the neutron star. Alternatively, the outer nebula could have been expelled during a different scenario — perhaps even involving another star. Future observations of the nebulas and neutron star appear likely to resolve the situation.

from NASA https://ift.tt/2DDSt7b
via IFTTT 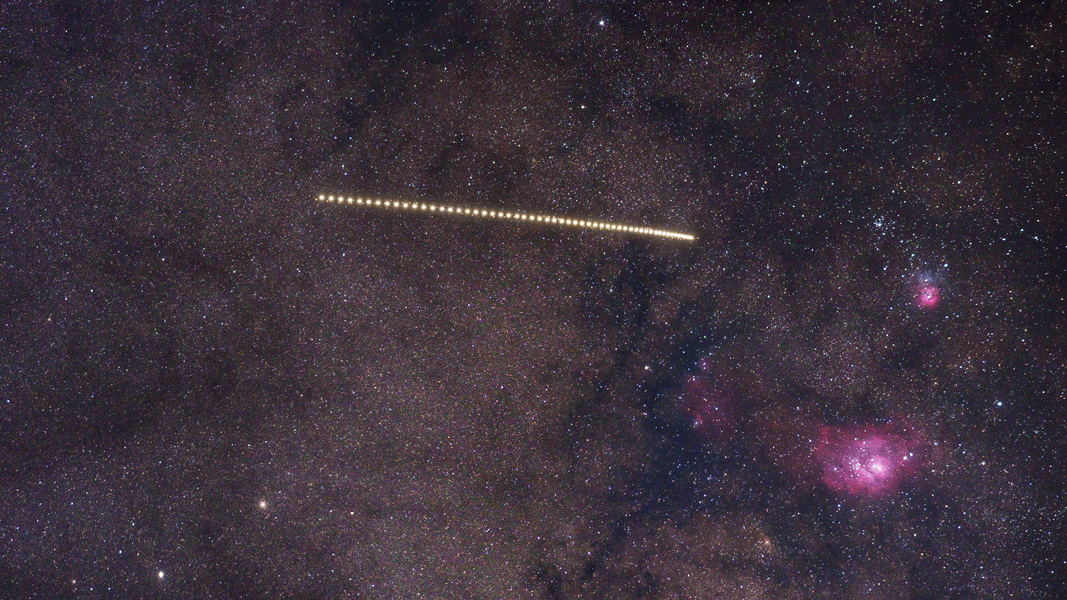 For 55 consecutive nights Mediterranean skies were at least partly clear this summer, from the 1st of July to the 24th of August 2018. An exposure from each night was incorporated in this composited telephoto and telescopic image to follow bright planet Saturn as it wandered through the generous evening skies. Through August, the outer planet’s seasonal apparent retrograde motion slowed and drifted to the right, framed by a starry background. That brought it near the line-of-sight to the central Milky Way, and the beautiful Lagoon (M8) and Trifid (20) nebulae. Of course Saturn’s largest moon Titan was also along for the ride. Swinging around the gas giant in a 16 day long orbit, Titan’s resulting wave-like motion is easier to spot when the almost-too-bright Saturn is digitally edited from the scene.

from NASA https://ift.tt/2P1qe3H
via IFTTT 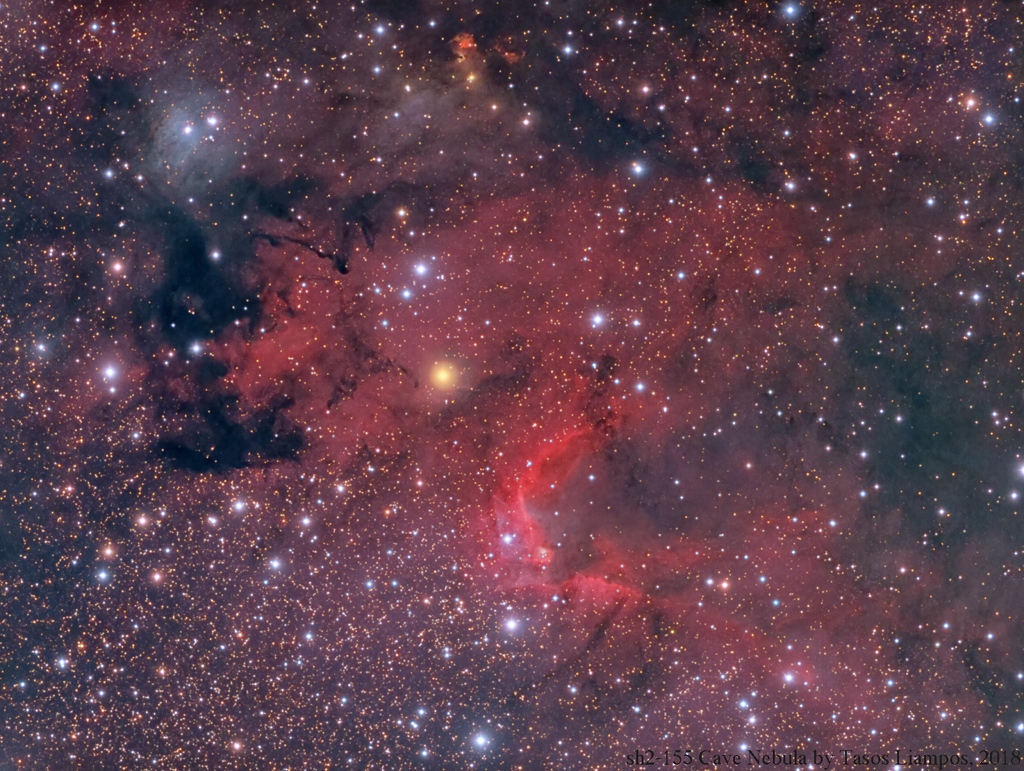 This colorful skyscape spans about two full moons across nebula rich starfields along the plane of our Milky Way Galaxy in the royal northern constellation Cepheus. Near the edge of the region’s massive molecular cloud some 2,400 light-years away, bright reddish emission region Sharpless (Sh) 155 is below and right of center, also known as the Cave Nebula. About 10 light-years across the cosmic cave’s bright walls of gas are ionized by ultraviolet light from the hot young stars around it. Dusty blue reflection nebulae, like vdB 155 at upper left, and dense obscuring clouds of dust also abound on the interstellar canvas. Astronomical explorations have revealed other dramatic signs of star formation, including the bright red fleck of Herbig-Haro (HH) 168. Near top center in the frame, the Herbig-Haro object emission is generated by energetic jets from a newborn star.

from NASA https://ift.tt/2Opmax7
via IFTTT 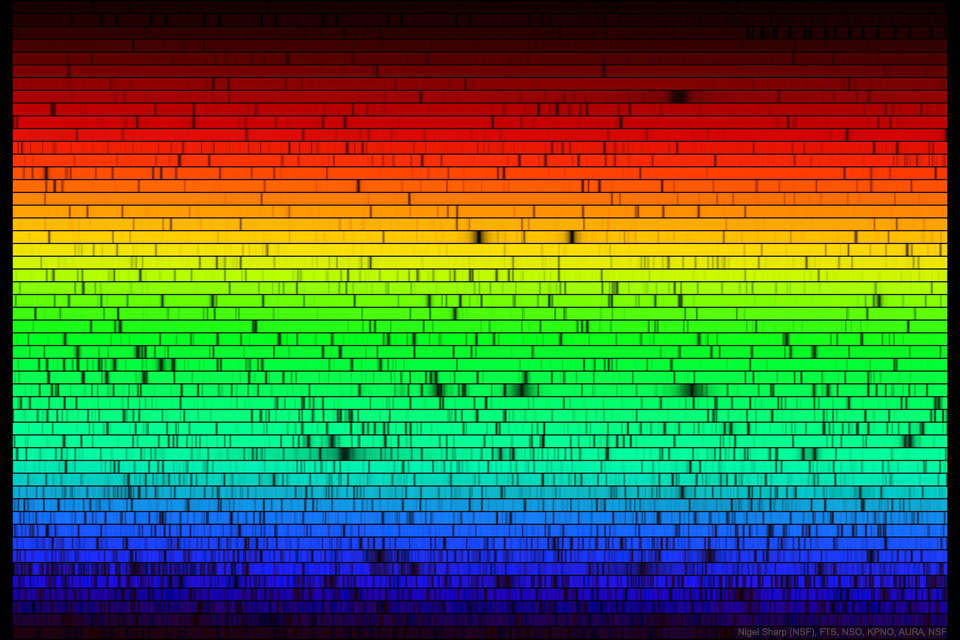 It is still not known why the Sun’s light is missing some colors. Here are all the visible colors of the Sun, produced by passing the Sun’s light through a prism-like device. The spectrum was created at the McMath-Pierce Solar Observatory and shows, first off, that although our white-appearing Sun emits light of nearly every color, it does indeed appear brightest in yellow-green light. The dark patches in the above spectrum arise from gas at or above the Sun’s surface absorbing sunlight emitted below. Since different types of gas absorb different colors of light, it is possible to determine what gasses compose the Sun. Helium, for example, was first discovered in 1870 on a solar spectrum and only later found here on Earth. Today, the majority of spectral absorption lines have been identified – but not all.

from NASA https://ift.tt/2OQxUWg
via IFTTT 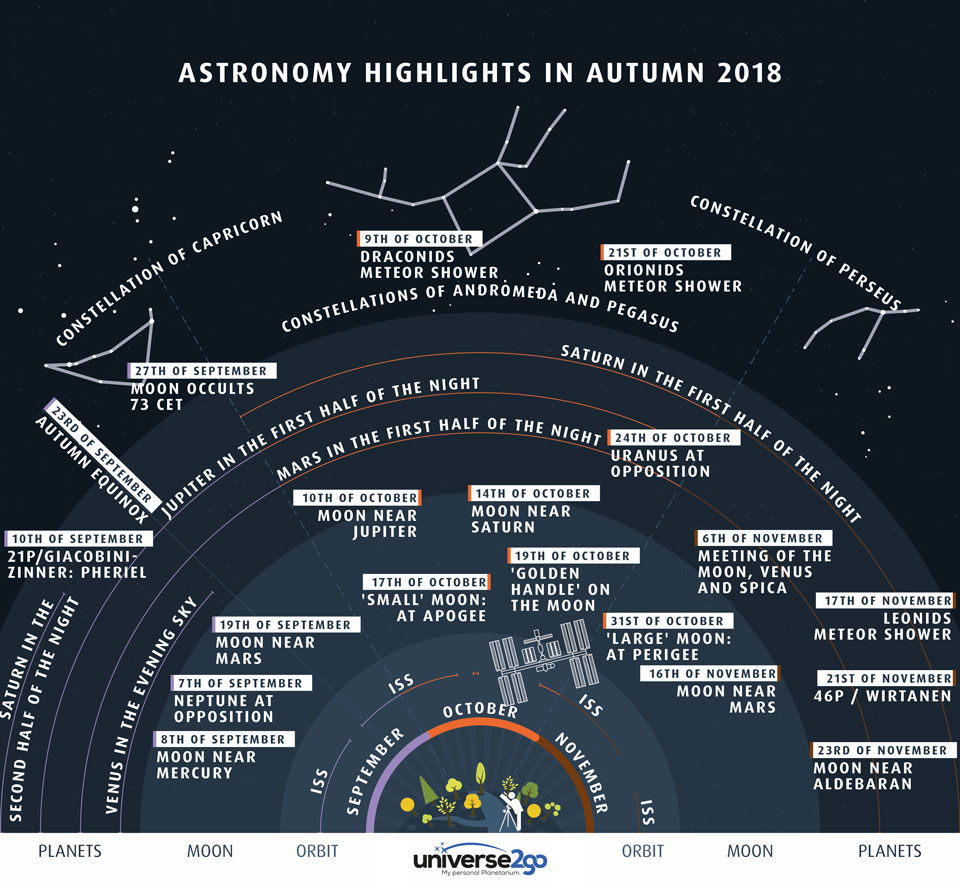 What can you see in the night sky this season? The featured graphic gives a few highlights for Earth’s northern hemisphere. Viewed as a clock face centered at the bottom, early (northern) autumn sky events fan out toward the left, while late autumn events are projected toward the right. Objects relatively close to Earth are illustrated, in general, as nearer to the cartoon figure with the telescope at the bottom center — although almost everything pictured can be seen without a telescope. As happens during any season, constellations appear the same year to year, and, as usual, the Leonids meteor shower will peak in mid-November. Also as usual, the International Space Station (ISS) can be seen, at times, as a bright spot drifting across the sky after sunset. Planets visible after sunset this autumn include Jupiter and Mars, and during late autumn, Saturn.

from NASA https://ift.tt/2QUpFK9
via IFTTT

Two small robots have begun hopping around the surface of asteroid Ryugu. The rovers, each the size of a small frying pan, move around the low gravity of kilometer-sized 162173 Ryugu by hopping, staying aloft for about 15 minutes and typically landing again several meters away. On Saturday, Rover 1A returned an early picture of its new home world, on the left, during one of its first hops. On Friday, lander MINERVA-II-1 detached from its mothership Hayabusa2, dropped Rovers 1A and 1B, and then landed on Ryugu. Studying Ryugu could tell humanity not only about Ryugu’s surface and interior, but about what materials were available in the early Solar System for the development of life. Two more hopping rovers are planned for release, and Hayabusa2 itself is scheduled to collect a surface sample from Ryugu and return it to Earth for detailed analysis before 2021.

from NASA https://ift.tt/2NybBIq
via IFTTT 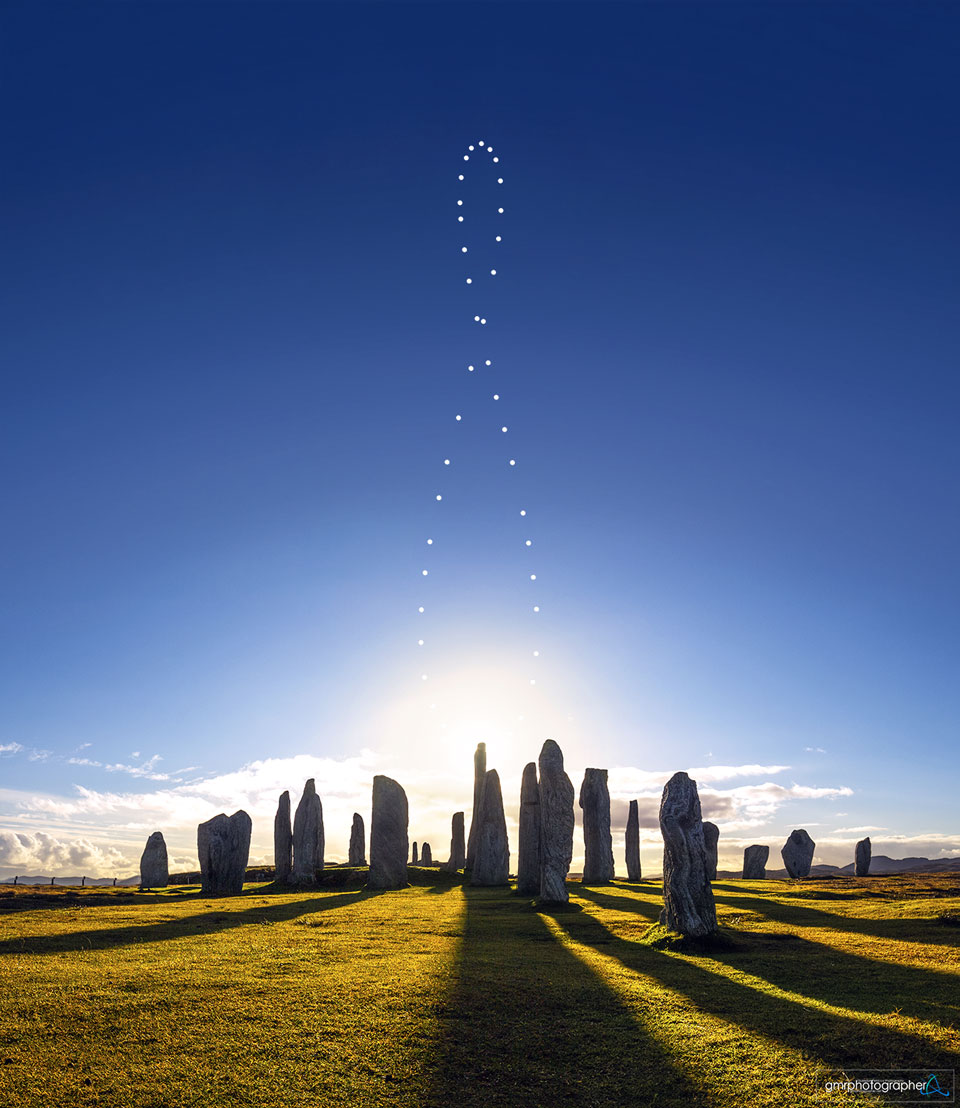 Does the Sun return to the same spot on the sky every day at the same time? No. A more visual answer to that question is an analemma, a composite image taken from the same spot at the same time over the course of a year. The featured analemma was composed from images taken every few days at 4 pm near the village of Callanish in the Outer Hebrides in Scotland, UK. In the foreground are the Callanish Stones, a stone circle built around 2700 BC during humanity’s Bronze Age. It is not known if the placement of the Callanish Stones has or had astronomical significance. The ultimate causes for the figure-8 shape of this an all analemmas are the tilt of the Earth axis and the ellipticity of the Earth’s orbit around the Sun. At the solstices, the Sun will appear at the top or bottom of an analemma. Equinoxes, however, correspond to analemma middle points — not the intersection point. Today at 1:54 am (UT) is the equinox (“equal night”), when day and night are equal over all of planet Earth. Many cultures celebrate a change of season at an equinox.

from NASA https://ift.tt/2xwcFCm
via IFTTT 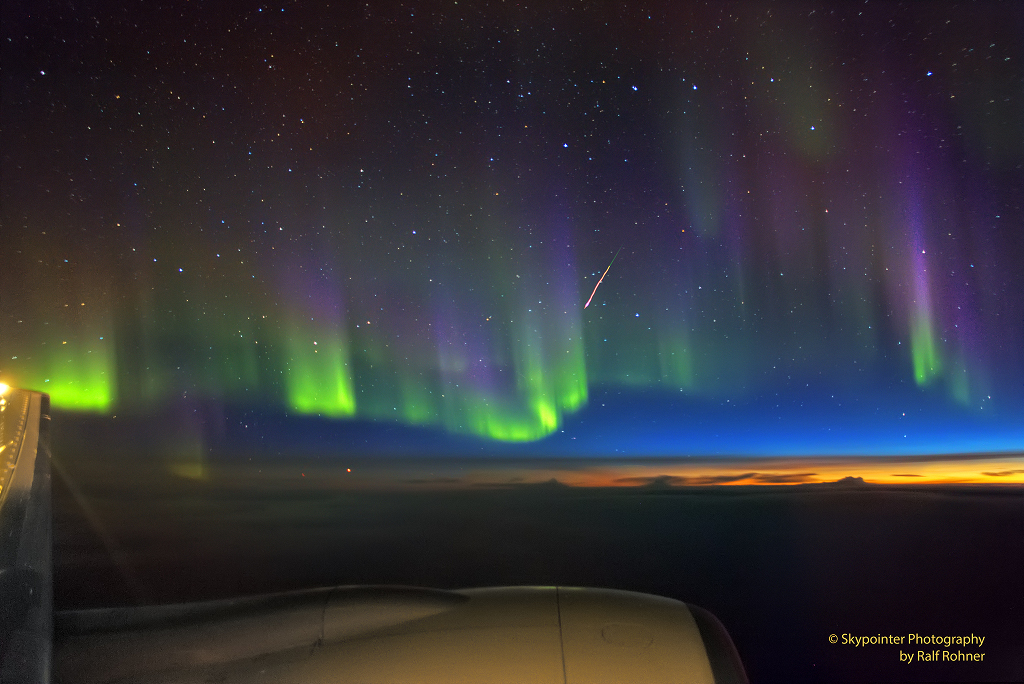 On the August 18 night flight from San Francisco to Zurich, a window seat offered this tantalizing view when curtains of light draped a colorful glow across the sky over Hudson Bay. Constructed by digitally stacking six short exposures made with a hand held camera, the scene records the shimmering aurora borealis or northern lights just as the approaching high altitude sunrise illuminated the northeastern horizon. It also caught the flash of a Perseid meteor streaking beneath the handle stars of the Big Dipper of the north. A few days past the meteor shower’s peak, its trail still points across the sky toward Perseus. Beautiful aurorae and shower meteors both occur in Earth’s upper atmosphere at altitudes of 100 kilometers or so, far above commercial airline fights. The aurora are caused by energetic charged particles from the magnetosphere, while meteors are trails of comet dust.

from NASA https://ift.tt/2I5sIeB
via IFTTT 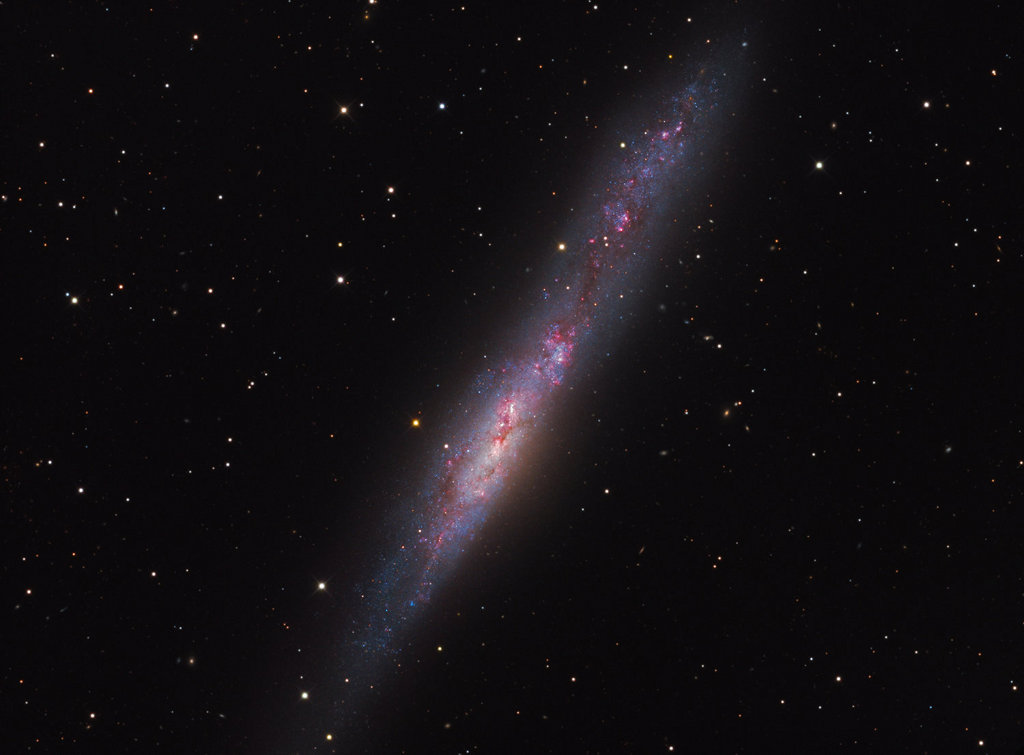 Irregular galaxy NGC 55 is thought to be similar to the Large Magellanic Cloud (LMC). But while the LMC is about 180,000 light-years away and is a well known satellite of our own Milky Way Galaxy, NGC 55 is more like 6 million light-years distant and is a member of the Sculptor Galaxy Group. Classified as an irregular galaxy, in deep exposures the LMC itself resembles a barred disk galaxy. Spanning about 50,000 light-years, NGC 55 is seen nearly edge-on though, presenting a flattened, narrow profile in contrast with our face-on view of the LMC. Just as large star forming regions create emission nebulae in the LMC, NGC 55 is also seen to be producing new stars. This highly detailed galaxy portrait highlights a bright core crossed with dust clouds, telltale pinkish star forming regions, and young blue star clusters in NGC 55.

from NASA https://ift.tt/2ptuZYh
via IFTTT 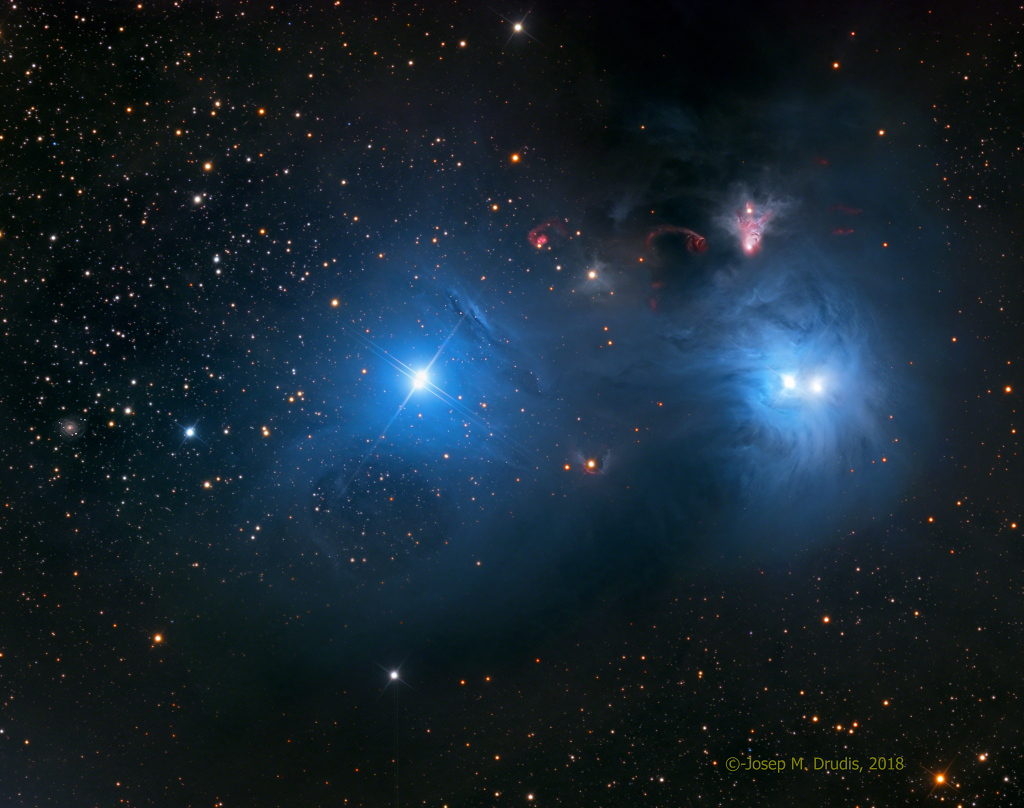 Cosmic dust clouds and young, energetic stars inhabit this telescopic vista, less than 500 light-years away toward the northern boundary of Corona Australis, the Southern Crown. The dust clouds effectively block light from more distant background stars in the Milky Way. But the striking complex of reflection nebulae cataloged as NGC 6726, 6727, and IC 4812 produce a characteristic color as blue light from the region’s young, hot stars is reflected by the cosmic dust. The dust also obscures from view stars still in the process of formation. At top right, smaller yellowish nebula NGC 6729 bends around young variable star R Coronae Australis. Near it, glowing arcs and loops shocked by outflows from embedded newborn stars are identified as Herbig-Haro objects. On the sky this field of view spans about 1 degree. That corresponds to almost 9 light-years at the estimated distance of the nearby star forming region.

from NASA https://ift.tt/2OAWKsX
via IFTTT