Put on your red/cyan glasses and float next to the jagged and double-lobed nucleus of Churyumov-Gerasimenko, also known as Comet 67P. The stereo anaglyph was created by combining two images from the Rosetta spacecraft’s narrow angle OSIRIS camera taken on July 25, 2015 from a distance of 184 kilometers. Numerous jets are emanating from the small solar system world’s active surface near its closest approach to the Sun. The larger lobe is around 4 kilometers in diameter, joined to a smaller, 2.5 kilometer diameter lobe by a narrow neck. Rosetta’s mission to the comet ended in September 2016 when the spacecraft was commanded to a controlled impact with the comet’s surface. Keep those 3D glasses on though. You can check out a new catalog of nearly 1400 stereo anaglyphs created from Rosetta image data on this website.

from NASA https://ift.tt/2TGcBIE
via IFTTT

The striking spiral galaxy M104 is famous for its nearly edge-on profile featuring a broad ring of obscuring dust lanes. Seen in silhouette against an extensive central bulge of stars, the swath of cosmic dust lends a broad brimmed hat-like appearance to the galaxy suggesting a more popular moniker, The Sombrero Galaxy. Hubble Space Telescope data have been used to to create this sharp view of the well-known galaxy. The processing results in a natural color appearance and preserves details often lost in overwhelming glare of M104’s bright central bulge when viewed with smaller ground-based telescopes. Also known as NGC 4594, the Sombrero galaxy can be seen across the spectrum and is host to a central supermassive black hole. About 50,000 light-years across and 28 million light-years away, M104 is one of the largest galaxies at the southern edge of the Virgo Galaxy Cluster.

from NASA https://ift.tt/2V4lI7d
via IFTTT

Messier 15 is a 13 billion year old relic of the early formative years of our galaxy, one of about 170 globular star clusters that still roam the halo of the Milky Way. About 200 light-years in diameter, it lies about 35,000 light years away toward the constellation Pegasus. But this realistic looking view of the ancient globular star cluster is not a photograph. Instead it’s an animated gif image constructed from remarkably precise individual measurements of star positions, brightness, and color. The astronomically rich data set used was made by the sky-scanning Gaia satellite which also determined parallax distances for 1.3 billion Milky Way stars. In the animated gif, twinkling stars are M15’s identified RR Lyrae stars. Plentiful in M15, RR Lyrae stars are evolved pulsating variable stars whose brightness and pulsation period, typically less than a day, are related.

from NASA https://ift.tt/2JN6F0A
via IFTTT

NGC 1333 is seen in visible light as a reflection nebula, dominated by bluish hues characteristic of starlight reflected by interstellar dust. A mere 1,000 light-years distant toward the heroic constellation Perseus, it lies at the edge of a large, star-forming molecular cloud. This striking close-up spans about two full moons on the sky or just over 15 light-years at the estimated distance of NGC 1333. It shows details of the dusty region along with telltale hints of contrasty red emission from Herbig-Haro objects, jets and shocked glowing gas emanating from recently formed stars. In fact, NGC 1333 contains hundreds of stars less than a million years old, most still hidden from optical telescopes by the pervasive stardust. The chaotic environment may be similar to one in which our own Sun formed over 4.5 billion years ago.

from NASA https://ift.tt/2HJK03l
via IFTTT

Why are stars forming in the bridge between these colliding galaxies? Usually when galaxies crash, star formation is confined to galaxy disks or tidal tails. In Arp 194, though, there are bright knots of young stars right in a connecting bridge. Analyses of images and data including the featured image of Arp 194 from Hubble, as well as computer simulations of the interaction, indicate that the bottom galaxy passed right through the top galaxy within the past 100 million years. The result has left a stream of gas that is now falling toward the bottom galaxy. Astronomers hypothesize that stars form in this bridge because of the recent fading of turbulence after the rapid collision. In about a billion years, the galaxies — including a smaller galaxy superposed on the upper galaxy (see it?) — will all merge into one larger galaxy.

from NASA https://ift.tt/2CDpNZ1
via IFTTT 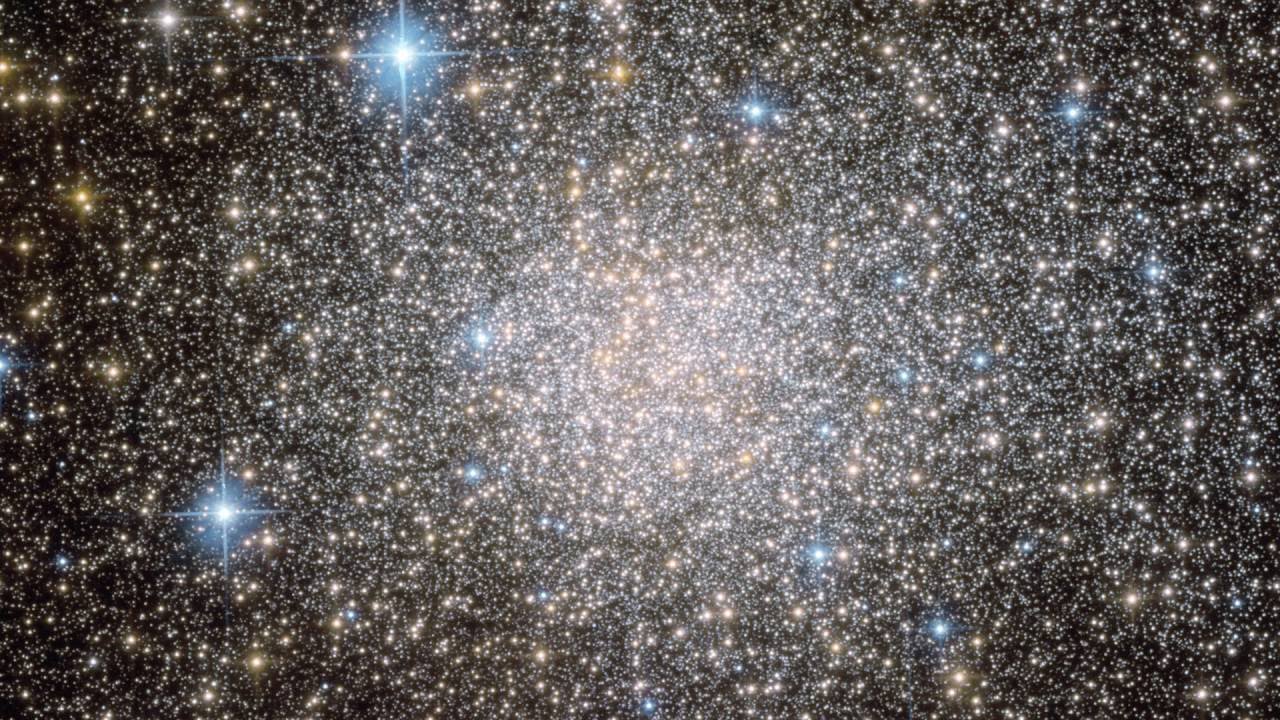 Globular clusters once ruled the Milky Way. Back in the old days, back when our Galaxy first formed, perhaps thousands of globular clusters roamed our Galaxy. Today, there are less than 200 left. Over the eons, many globular clusters were destroyed by repeated fateful encounters with each other or the Galactic center. Surviving relics are older than any Earth fossil, older than any other structures in our Galaxy, and limit the universe itself in raw age. There are few, if any, young globular clusters in our Milky Way Galaxy because conditions are not ripe for more to form. The featured video shows what it might look like to go from the Earth to the globular cluster Terzan 5, ending with a picture of the cluster taken with the Hubble Space Telescope. This star cluster has been found to contain not only stars formed in the early days of our Milky Way Galaxy, but also, quite surprisingly, others that formed in a separate burst of star formation about 7 billion years later.

from NASA https://ift.tt/2TRMxPD
via IFTTT 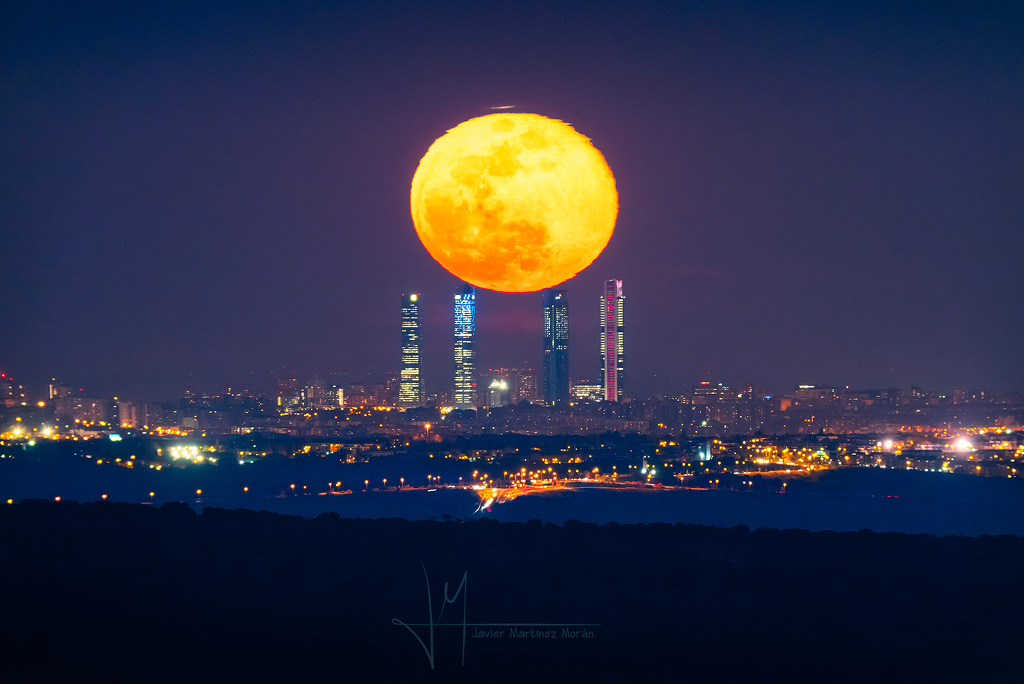 The first Full Moon of northern spring rises behind four distant towers in this telescopic view. In an image captured from some 40 kilometers west of the city of Madrid, this moonrise also represents a near coincidence of the full lunar phase with lunar perigee and the March equinox. Close to the horizon, the Full Moon’s strangely rippled and distorted shape has more to do with the long sight-line through a layered atmosphere, though. Tantalizing visible effects of the substantial atmospheric refraction include the appearance of a thin floating sliver just above the lunar disk. The remarkable optical mirage is related to the more commonly witnessed green flash of the setting Sun.

Despite the cold, a chance to view the shimmering northern lights coaxed this skygazer onto the frozen surface of Lake Superior on the west coast of the Keweenaw Peninusla and offered this nocturnal crescendo as a reward. A northern late winter night sky also plays across the panoramic composition of images made between 10pm and 1am on the night of February 28/March 1. At left, a faint band of Zodiacal light rises sharply from the horizon crossing Mars and the Pleides star cluster. Both the distant galaxy M31 and our own Milky Way shine above the greenish auroral arc. Navigational north pole star Polaris is centered above and accompanied on the right by the northern night’s most recognizable asterism, the Big Dipper. Terrestrial lights include markers for two breakwaters on the the horizon near the center of the scene.

from NASA https://ift.tt/2FrNgOu
via IFTTT

Stars trail and the Sun rises in this night and day composite panorama made on March 19. The view looks toward the eastern horizon from La Nava de Santiago, Spain. To create it, a continuous series of digital frames was recorded for about two hours and combined to trace the concentric motion of the stars through the night sky. A reflection of the Earth’s rotation, star trails curve around the north celestial pole toward upper left and the south celestial pole toward the lower right. Of course on that day the Sun was near the celestial equator, a diagonal straight line in the wide-angle projection. A dense dimming filter was used to capture the Sun’s image every two minutes. Superimposed on the star trails it rose due east in the morning sky. In the scene, foreground landscape and a local prehistoric monument were illuminated by full moonlight, though. The monument’s corridor faces nearly to the east and the equinox sunrise.

from NASA https://ift.tt/2WaUxrz
via IFTTT

Welcome to an equinox on planet Earth. Today is the first day of spring in our fair planet’s northern hemisphere, fall in the southern hemisphere, with day and night nearly equal around the globe. At an equinox Earth’s terminator, the dividing line between day and night, connects the planet’s north and south poles as seen at the start of this remarkable time-lapse video compressing an entire year into twelve seconds. To make it, the Meteosat satellite recorded these infrared images every day at the same local time from a geosynchronous orbit. The video actually starts at the September 2010 equinox with the terminator aligned vertically. As the Earth revolves around the Sun, the terminator tilts to provide less daily sunlight to the northern hemisphere, reaching the solstice and northern hemisphere winter at the maximum tilt. As the year continues, the terminator tilts back again and March 2011 equinox arrives halfway through the video. Then the terminator swings past vertical the other way, reaching the the June 2011 solstice and the beginning of northern summer. The video ends as the September equinox returns.

from NASA https://ift.tt/2Joytbm
via IFTTT