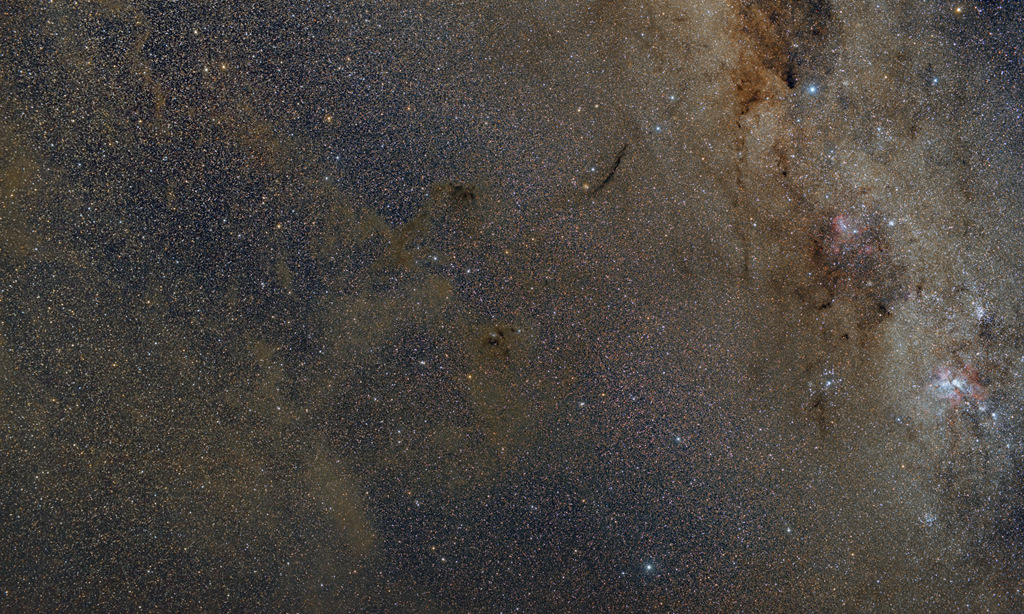 South pole star Sigma Octantis (of the constellation Octans) is on the left of this starry expanse spanning over 40 degrees across far southern skies. You’ll have to look hard to find it, though. The southern hemisphere’s faint counterpart to the north star Polaris, Sigma Octantis is a little over one degree from the South Celestial Pole. Also known as Polaris Australis, Sigma Octantis is below 5th magnitude, some 25 times fainter than Polaris and not easy to see with the unaided eye. In fact, it may be the faintest star depicted on a national flag. The remarkable deep and wide-field view also covers faint, dusty galactic cirrus clouds, bounded at the right by the star clusters and nebulae along the southern reaches of plane of our Milky Way galaxy. Near the upper right corner is yellowish Gamma Crucis, the top of the Southern Cross. Easy to pick out above and right of center is the long Dark Doodad nebula in the southern constellation Musca, the Fly.

from NASA https://ift.tt/2lGKBpM
via IFTTT

It looks like a big space diamond — but with craters. It’s 162173 Ryugu (Dragon’s Castle), and Japan‘s robotic Hayabusa2 mission is now arriving at this near-Earth asteroid. Ambitious Hayabusa2 is carrying an armada of separable probes, including two impactors, four small close-proximity hoverers, three small surface hoppers, and the Mobile Asteroid Surface Scout (MASCOT) which will land, study, and move around on Ryugu’s surface. Most of these are equipped with cameras. Moreover, Hayabusa2 itself is scheduled to collect surface samples and return these samples to Earth for a detailed analysis near the end of 2020. Previously, what was known about asteroid Ryugu was its orbit, that it spans about one kilometer, and that it has a dark surface that reflects unusual colors. Studying Ryugu could tell humanity not only about Ryugu’s surface and interior, but about what materials were available in the early Solar System for the development of life. Pictured, a series of approach images shows features suggestive of large boulders and craters. 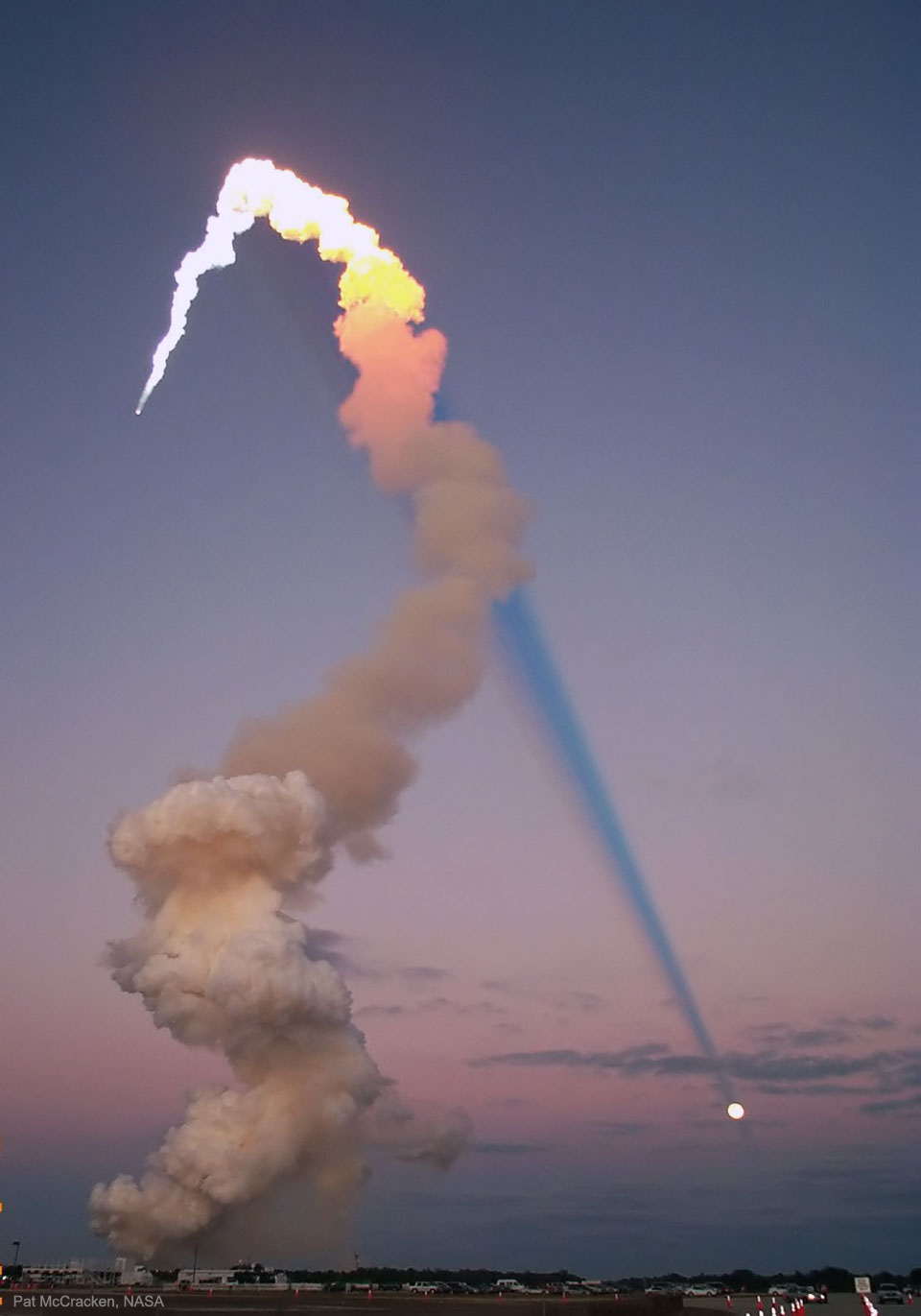 Why would the shadow of a space shuttle launch plume point toward the Moon? In early 2001 during a launch of Atlantis, the Sun, Earth, Moon, and rocket were all properly aligned for this photogenic coincidence. First, for the space shuttle‘s plume to cast a long shadow, the time of day must be either near sunrise or sunset. Only then will the shadow be its longest and extend all the way to the horizon. Finally, during a Full Moon, the Sun and Moon are on opposite sides of the sky. Just after sunset, for example, the Sun is slightly below the horizon, and, in the other direction, the Moon is slightly above the horizon. Therefore, as Atlantis blasted off, just after sunset, its shadow projected away from the Sun toward the opposite horizon, where the Full Moon happened to be.

from NASA https://ift.tt/2KhLq2K
via IFTTT 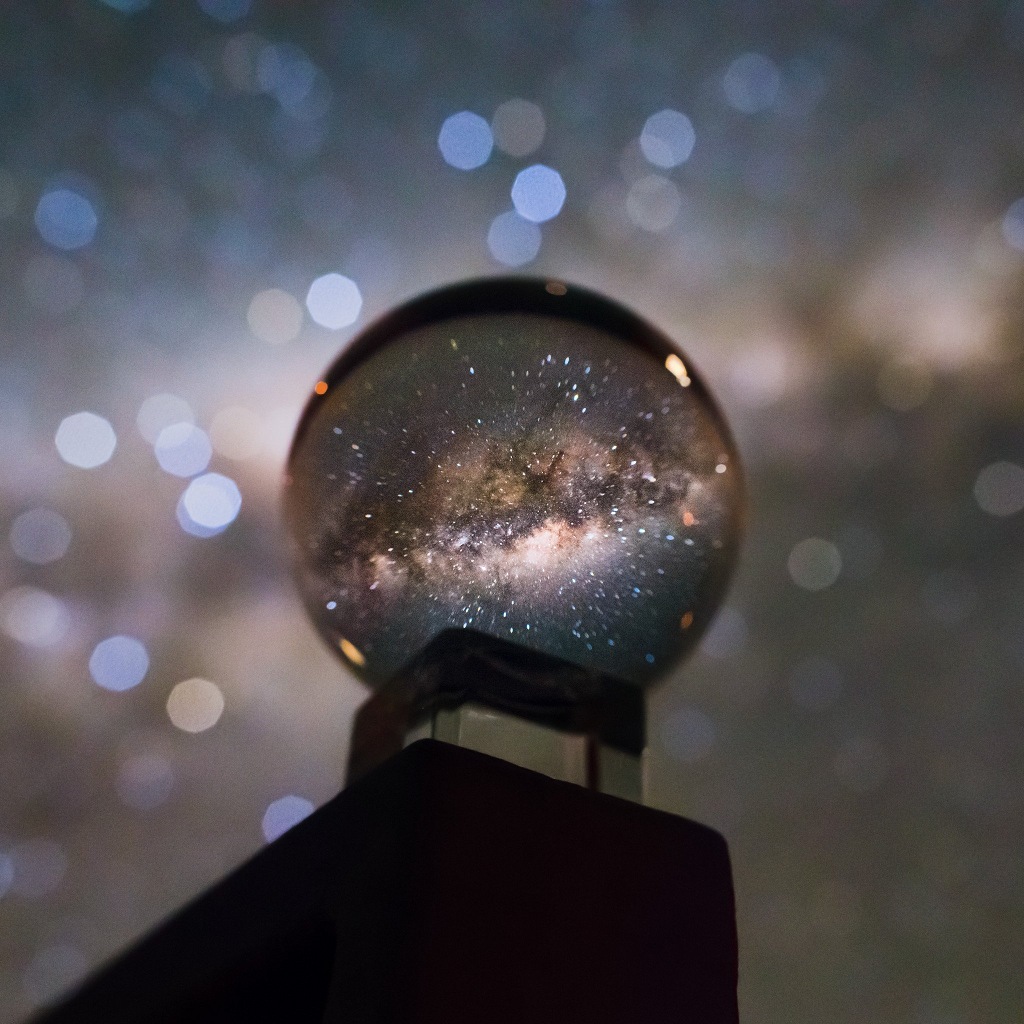 A small crystal ball seems to hold a whole galaxy in this creative snapshot. Of course, the galaxy is our own Milky Way. Its luminous central bulge marked by rifts of interstellar dust spans thousands of light-years. On this long southern hemisphere night it filled dark Chilean skies over Paranal Observatory. The single exposure image did not require a Very Large Telescope, though. Experiments with a digital camera on a tripod and crystal ball perched on a handrail outside the Paranal Residencia produced the evocative, cosmic marble portrait of our home galaxy.

from NASA https://ift.tt/2If0Ov0
via IFTTT 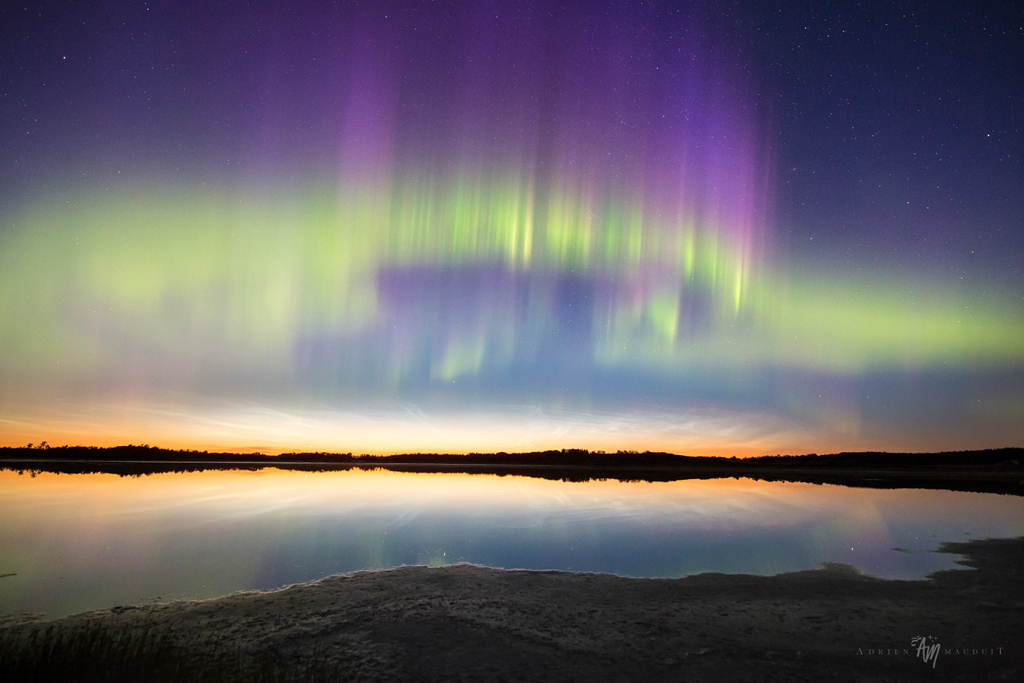 Skies after the near-solstice sunset on June 17 are reflected in this calm lake. The tranquil twilight scene was captured near Bashaw, Alberta, Canada, northern planet Earth. Usually spotted at high latitudes in summer months, night shining or noctilucent clouds hang just above the horizon, transfusing light into a darker sky. Near the edge of space, the icy apparitions are condensations on meteoric dust or volcanic ash still in sunlight at extreme altitudes. Also near the edge of space on this short northern night, solar activity triggered the lovely apparition of aurora borealis or northern lights.

from NASA https://ift.tt/2JTcUzv
via IFTTT 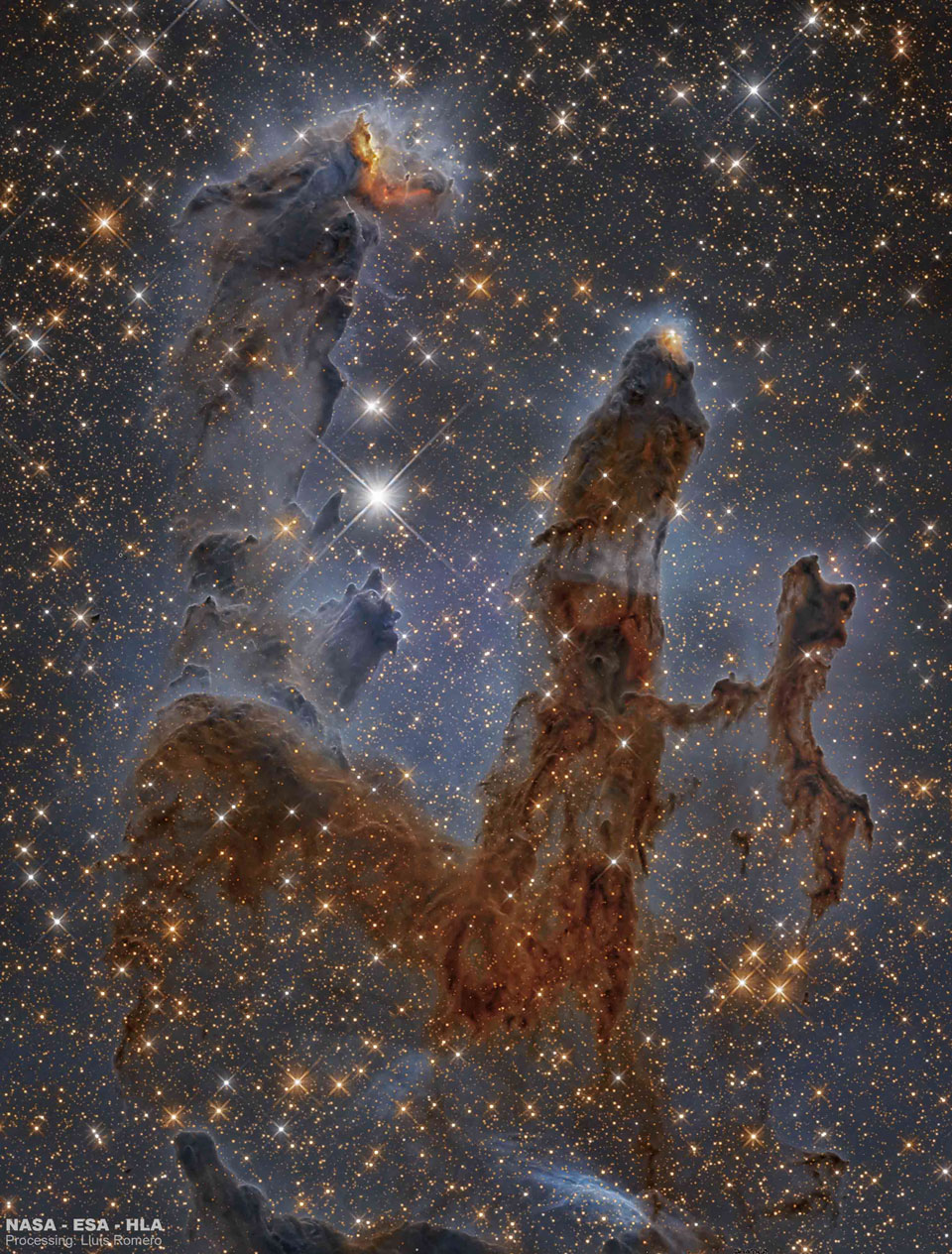 Newborn stars are forming in the Eagle Nebula. Gravitationally contracting in pillars of dense gas and dust, the intense radiation of these newly-formed bright stars is causing surrounding material to boil away. This image, taken with the Hubble Space Telescope in near infrared light, allows the viewer to see through much of the thick dust that makes the pillars opaque in visible light. The giant structures are light years in length and dubbed informally the Pillars of Creation. Associated with the open star cluster M16, the Eagle Nebula lies about 6,500 light years away. The Eagle Nebula is an easy target for small telescopes in a nebula-rich part of the sky toward the split constellation Serpens Cauda (the tail of the snake).

from NASA https://ift.tt/2K9n4vy
via IFTTT

Sometimes the Sun’s surface becomes a whirlwind of activity. Pictured is a time-lapse video of the Sun‘s surface taken over a two hour period in early May, run both forwards and backwards. The Sun’s surface was blocked out so that details over the edge could be imaged in greater detail. Hot plasma is seen swirling over the solar limb in an ongoing battle between changing magnetic fields and constant gravity. The featured prominence rises about one Earth-diameter over the Sun’s surface. Energetic events like this are becoming less common as the Sun nears a minimum in its 11-year activity cycle.

from NASA https://ift.tt/2JX9Luy
via IFTTT 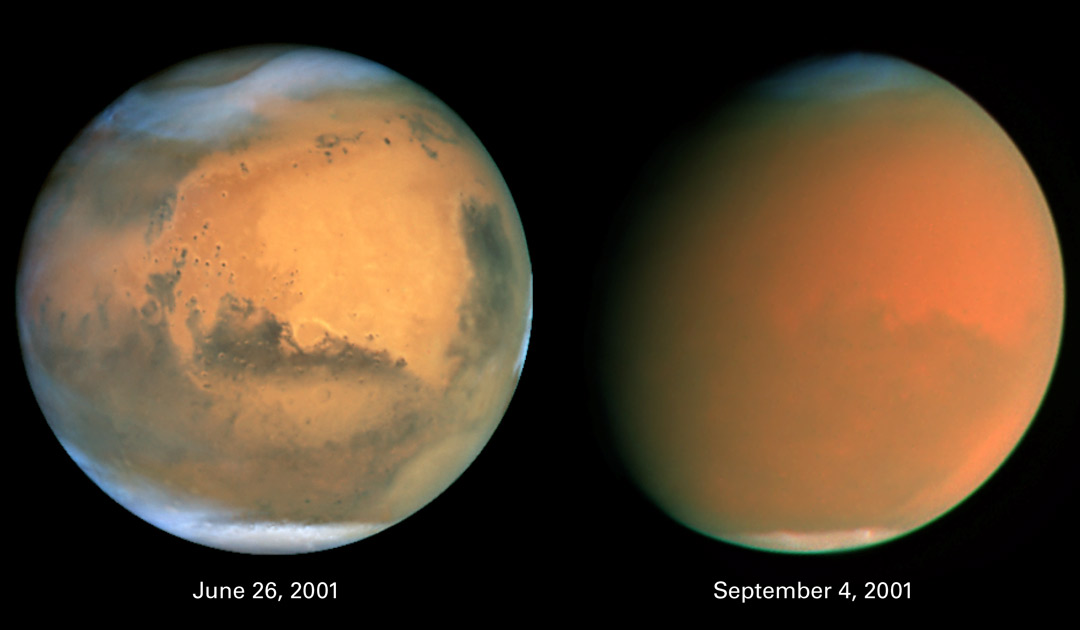 What’s happened to Mars? In 2001, Mars underwent a tremendous planet-wide dust storm — one of the largest ever recorded from Earth. To show the extent, these two Hubble Space Telescope storm watch images from late June and early September (2001) offer dramatically contrasting views of the martian surface. At left, the onset of smaller “seed” storms can be seen near the Hellas basin (lower right edge of Mars) and the northern polar cap. A similar surface view at right, taken over two months later, shows the fully developed extent of the obscuring global storm. Although this storm eventually waned, in recent days a new large dust storm has been taking hold of the red planet.

from NASA https://ift.tt/2MzmyFo
via IFTTT

It’s storm season on Mars. Dusty with a chance of dust is the weather report for Gale crater as a recent planet-scale dust storm rages. On June 10 looking toward the east-northeast crater rim, the Curiosity rover’s Mastcam captured this image of its local conditions so far. Meanwhile over 2,000 kilometers away, the Opportunity rover ceased science operations as the storm grew thicker at its location on the west rim of Endeavour crater, and has stopped communicating, waiting out the storm for now. Curiosity is powered by a radioisotope thermoelectric generator, but the smaller Opportunity rover uses solar panels to charge its batteries. For Opportunity, the increasingly severe lack of sunlight has caused its batteries to run low.

from NASA https://ift.tt/2ybKDii
via IFTTT 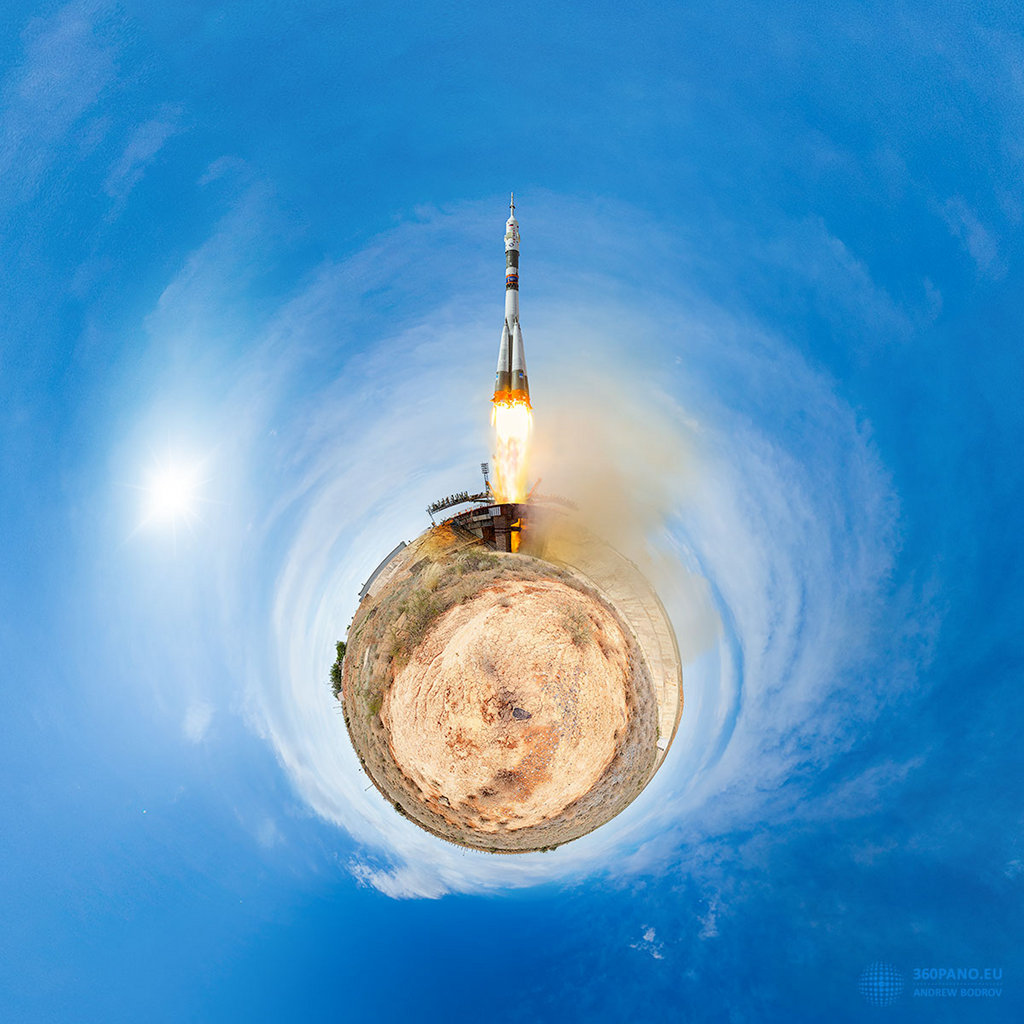 Engines blazing, a large rocket bids farewell to this little planet. Of course, the little planet is really planet Earth and the large rocket is a Soyuz-FG rocket. Launched from the Baikonur Cosmodrome in Kazakhstan on June 6 it carried a Soyuz MS-09 spacecraft into orbit. On board were International Space Station Expedition 56-57 crew members Sergey Prokopyev of Roscosmos, Serena Aunon-Chancellor of NASA and Alexander Gerst of ESA. Their spacecraft successfully docked with humanity’s orbiting outpost just two days later. The little planet projection is the digitally warped and stitched mosaic of images covering 360 by 180 degrees, captured during the 2018 Star Trek car expedition.

from NASA https://ift.tt/2JQphs3
via IFTTT