Rocks from space hit Earth every day. The larger the rock, though, the less often Earth is struck. Many kilograms of space dust pitter to Earth daily. Larger bits appear initially as a bright meteor. Baseball-sized rocks and ice-balls streak through our atmosphere daily, most evaporating quickly to nothing. Significant threats do exist for rocks near 100 meters in diameter, which strike the Earth roughly every 1000 years. An object this size could cause significant tsunamis were it to strike an ocean, potentially devastating even distant shores. A collision with a massive asteroid, over 1 km across, is more rare, occurring typically millions of years apart, but could have truly global consequences. Many asteroids remain undiscovered. In the featured image, one such asteroid — shown by the long blue streak — was found by chance in 1998 by the Hubble Space Telescope. A collision with a large asteroid would not affect Earth‘s orbit so much as raise dust that would affect Earth’s climate. One likely result is a global extinction of many species of life, possibly dwarfing the ongoing extinction occurring now.

from NASA https://ift.tt/3py7f2I
via IFTTT

Celestial sights of the southern sky shine above a cloudy planet Earth in this gorgeous night sky view. The scene was captured from an airliner’s flight deck at 38,000 feet on a steady westbound ride to Lima, Peru. To produce the sharp airborne astrophotograph, the best of a series of short exposures were selected and digitally stacked. The broad band of the southern Milky Way begins at top left with the dark Coalsack Nebula and Southern Cross. Its expanse of diffuse starlight encompasses the the Carina Nebula and large Gum Nebula toward the right. Canopus, alpha star of Carina and second brightest star in Earth’s night is easy to spot below the Milky Way, as is the dwarf galaxy known as the Large Magellanic Cloud. The Small Magellanic cloud just peeks above the cloudy horizon. Of course, the South Celestial Pole also lies within the starry southern frame.

from NASA https://ift.tt/36m6ceI
via IFTTT 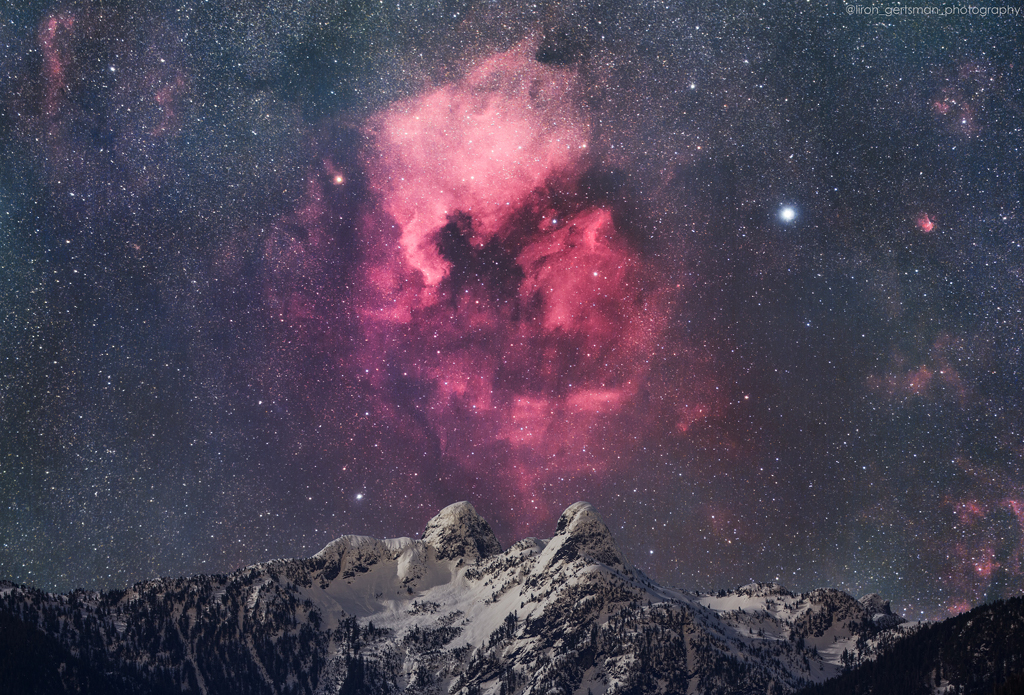 On January 21, light from the Moon near first quarter illuminated the foreground in this snowy mountain and night scene. Known as The Lions, the striking pair of mountain peaks are north of Vancouver, British Colombia, Canada, North America, planet Earth. Poised above the twin summits, left of Deneb alpha star of the constellation Cygnus, are emission regions NGC 7000 and IC 5070. Part of a large star forming complex about 1,500 light-years from Vancouver, they shine with the characteristic red glow of atomic hydrogen gas. Outlines of the bright emission regions suggest their popular names, The North America Nebula and The Pelican Nebula. The well-planned, deep nightscape is a composite of consecutive exposures made with a modified digital camera and telephoto lens. Foreground exposures were made with camera fixed to a tripod, background exposures were made tracking the sky. The result preserves sharp natural detail and reveals a range of brightness and color that your eye can’t quite see on its own.

from NASA https://ift.tt/39tNgN7
via IFTTT 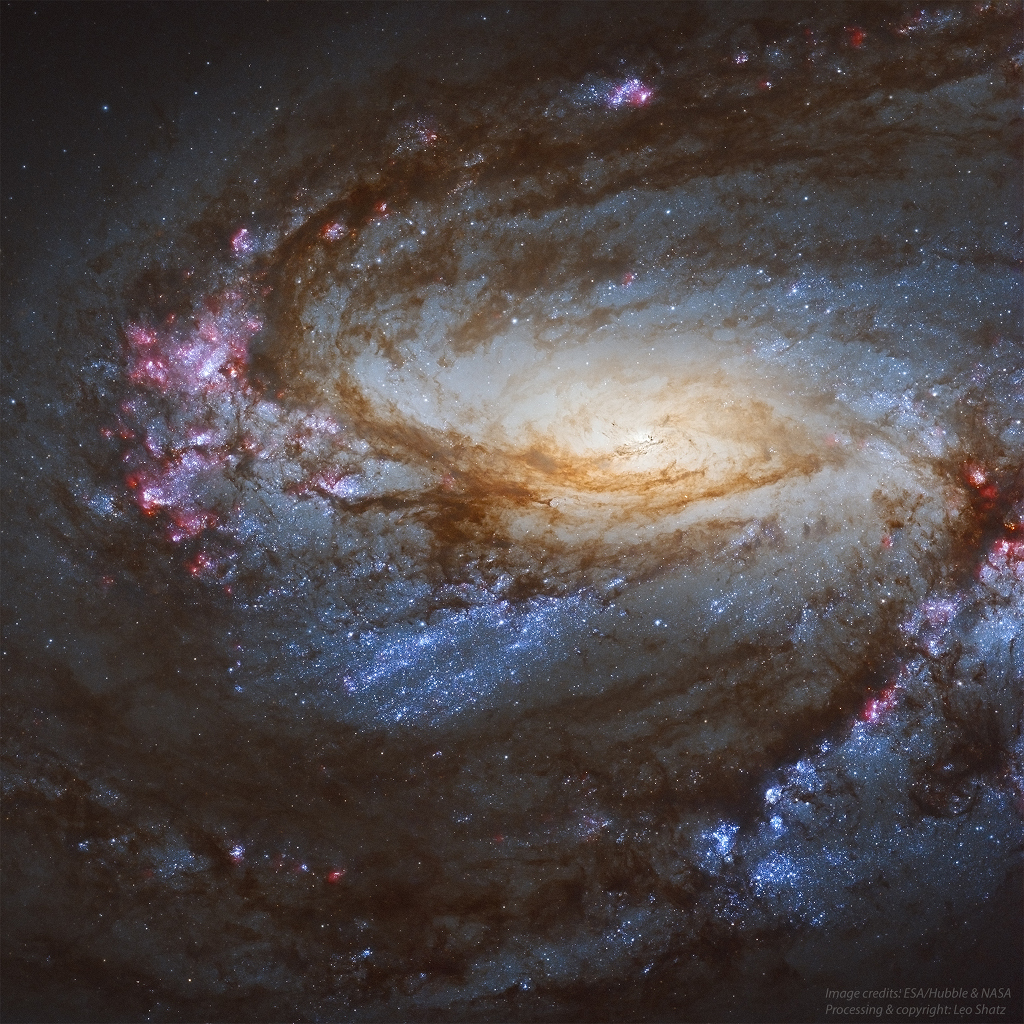 Big, beautiful spiral galaxy Messier 66 lies a mere 35 million light-years away. The gorgeous island universe is about 100 thousand light-years across, similar in size to the Milky Way. This reprocessed Hubble Space Telescope close-up view spans a region about 30,000 light-years wide around the galactic core. It shows the galaxy’s disk dramatically inclined to our line-of-sight. Surrounding its bright core, the likely home of a supermassive black hole, obscuring dust lanes and young, blue star clusters sweep along spiral arms dotted with the tell-tale glow of pinksh star forming regions. Messier 66, also known as NGC 3627, is the brightest of the three galaxies in the gravitationaly interacting Leo Triplet.

from NASA https://ift.tt/3onyifF
via IFTTT

How far do magnetic fields extend up and out of spiral galaxies? For decades astronomers knew only that some spiral galaxies had magnetic fields. However, after NRAO‘s Very Large Array (VLA) radio telescope (popularized in the movie Contact) was upgraded in 2011, it was unexpectedly discovered that these fields could extend vertically away from the disk by several thousand light-years. The featured image of edge-on spiral galaxy NGC 5775, observed in the CHANG-ES (Continuum Halos in Nearby Galaxies) survey, also reveals spurs of magnetic field lines that may be common in spirals. Analogous to iron filings around a bar magnet, radiation from electrons trace galactic magnetic field lines by spiraling around these lines at almost the speed of light. The filaments in this image are constructed from those tracks in VLA data. The visible light image, constructed from Hubble Space Telescope data, shows pink gaseous regions where stars are born. It seems that winds from these regions help form the magnificently extended galactic magnetic fields.

from NASA https://ift.tt/3plzUrS
via IFTTT

How did this strange-looking galaxy form? Astronomers turn detectives when trying to figure out the cause of unusual jumbles of stars, gas, and dust like NGC 1316. Inspection indicates that NGC 1316 is an enormous elliptical galaxy that somehow includes dark dust lanes usually found in a spiral galaxy. Detailed images taken by the Hubble Space Telescope shows details, however, that help in reconstructing the history of this gigantic tangle. Deep and wide images show huge collisional shells, while deep central images reveal fewer globular clusters of stars toward NGC 1316’s interior. Such effects are expected in galaxies that have undergone collisions or merging with other galaxies in the past few billion years. The dark knots and lanes of dust, prominent in the featured image, indicate that one or more of the devoured galaxies were spiral galaxies. NGC 1316 spans about 50,000 light years and lies about 60 million light years away toward the constellation of the Furnace (Fornax).

Have you ever seen the Southern Cross? This famous four-star icon is best seen from Earth’s Southern Hemisphere. The featured image was taken last month in Chile and captures the Southern Cross just to the left of erupting Villarrica, one of the most active volcanos in our Solar System. Connecting the reddest Southern Cross star Gacrux through the brightest star Acrux points near the most southern location in the sky: the South Celestial Pole (SCP), around which all southern stars appear to spin as the Earth turns. In modern times, no bright star resides near the SCP, unlike in the north where bright Polaris now appears near the NCP. Extending the Gacrux – Acrux line still further (from about four to about seven times their angular separation) leads near the Small Magellanic Cloud, a bright satellite galaxy of our Milky Way Galaxy. The Southern Cross asterism dominates the Crux constellation, a deeper array of stars that includes four Cepheid variable stars visible to the unaided eye. Just above the volcano in the image, and looking like a dark plume, is the Coalsack Nebula, while the large red star-forming Carina Nebula is visible on the upper left.

from NASA https://ift.tt/39glT8Y
via IFTTT 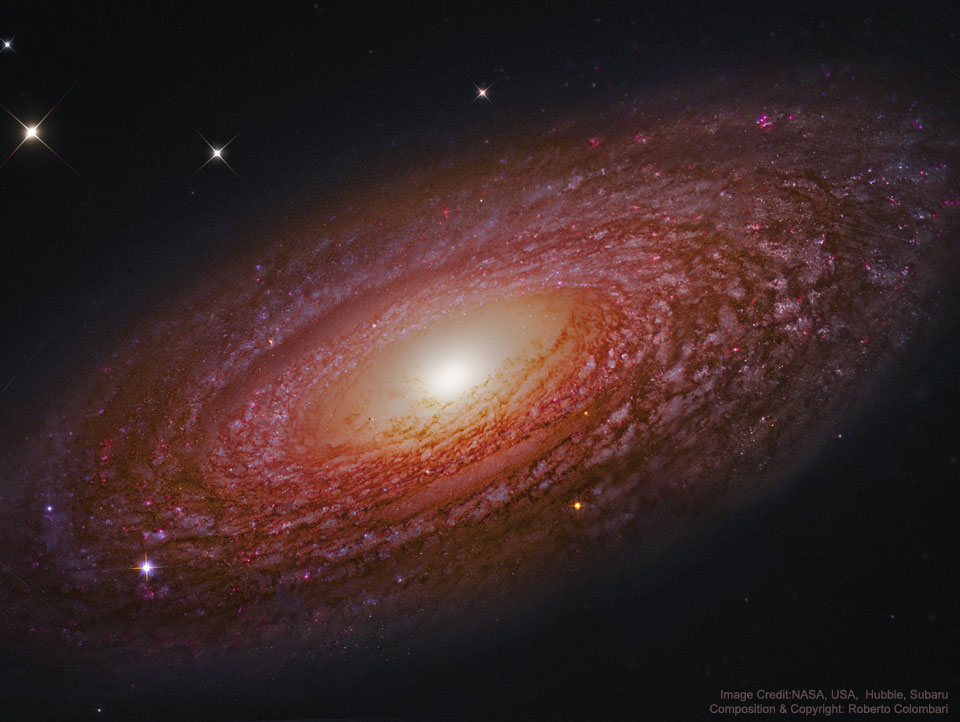 It is one of the more massive galaxies known. A mere 46 million light-years distant, spiral galaxy NGC 2841 can be found in the northern constellation of Ursa Major. This sharp view of the gorgeous island universe shows off a striking yellow nucleus and galactic disk. Dust lanes, small, pink star-forming regions, and young blue star clusters are embedded in the patchy, tightly wound spiral arms. In contrast, many other spirals exhibit grand, sweeping arms with large star-forming regions. NGC 2841 has a diameter of over 150,000 light-years, even larger than our own Milky Way. The featured composite image merges exposures from the orbiting 2.4-meter Hubble Space Telescope and the ground-based 8.2-meter Subaru Telescope. X-ray images suggest that resulting winds and stellar explosions create plumes of hot gas extending into a halo around NGC 2841.

from NASA https://ift.tt/3qOTeOC
via IFTTT 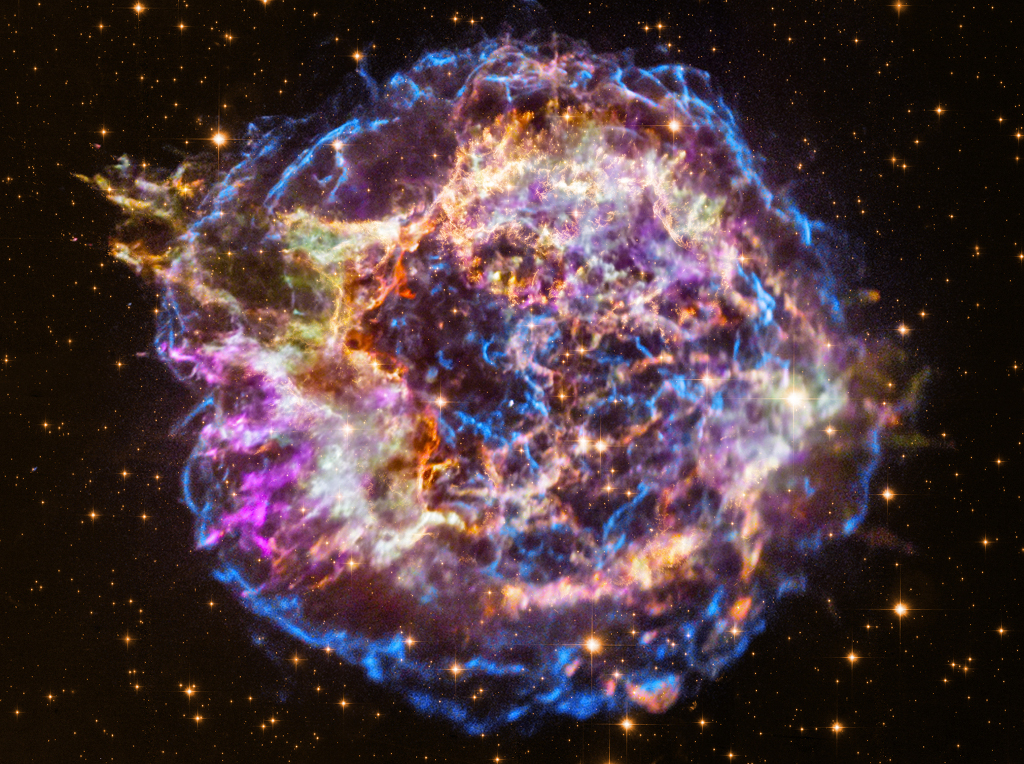 from NASA https://ift.tt/397riiQ
via IFTTT

An expanse of cosmic dust, stars and nebulae along the plane of our Milky Way galaxy form a beautiful ring in this projected all-sky view. The creative panorama covers the entire galaxy visible from planet Earth, an ambitious 360 degree mosaic that took two years to complete. Northern hemisphere sites in western China and southern hemisphere sites in New Zealand were used to collect the image data. Like a glowing jewel set in the milky ring, the bulge of the galactic center, is at the very top. Bright planet Jupiter is the beacon just above the central bulge and left of red giant star Antares. Along the plane and almost 180 degrees from the galactic center, at the bottom of the ring is the area around Orion, denizen of the northern hemisphere’s evening winter skies. In this projection the ring of the Milky Way encompasses two notable galaxies in southern skies, the large and small Magellanic clouds.

from NASA https://ift.tt/3qKYKRY
via IFTTT