Sixty years ago, on January 31, 1958, the First Explorer was successfully launched by the Army Ballistic Missile Agency on a Jupiter-C rocket. Inaugurating the era of space exploration for the United States, Explorer I was a thirty pound satellite that carried instruments to measure temperatures, and micrometeorite impacts, along with an experiment designed by James A. Van Allen to measure the density of electrons and ions in space. The measurements made by Van Allen’s experiment led to an unexpected and then startling discovery of two earth-encircling belts of high energy electrons and ions trapped in the magnetosphere. Now known as the Van Allen Radiation belts, the regions are located in the inner magnetosphere, beyond low Earth orbit. Explorer I ceased transmitting on February 28, 1958, but remained in orbit until March of 1970.

from NASA http://ift.tt/2Gxjab3
via IFTTT 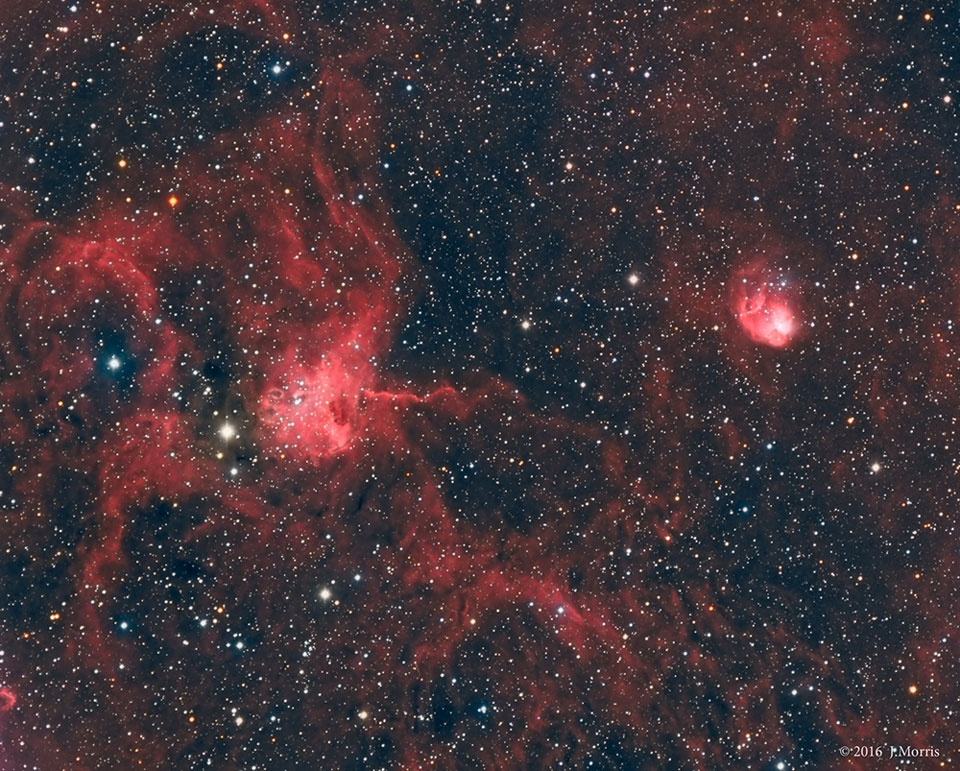 from NASA http://ift.tt/2DHUQS2
via IFTTT 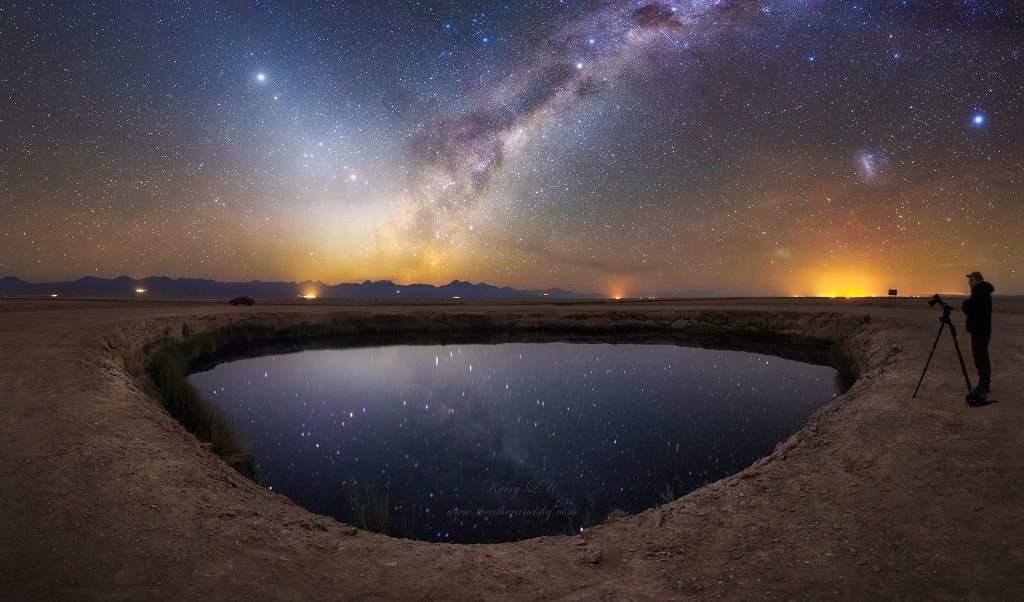 Staring toward the heavens, one of the many lagunas in the Atacama Desert salt flat calmly reflects a starry night sky near San Pedro de Atacama, Chile, planet Earth. Cosmic rifts of dust, star clouds, and nebulae of the central Milky Way galaxy are rising in the east, beyond a volcanic horizon. Caught in the six frame panorama serenely recorded in the early morning hours of January 15, planets Jupiter and Mars are close. Near the ecliptic, the bright planets are immersed in the Solar System’s visible band of Zodiacal light extending up and left from the galactic center. Above the horizon to the south (right) are the Large and Small clouds of Magellan, satellite galaxies of the Milky Way.

from NASA http://ift.tt/2BxKAtz
via IFTTT 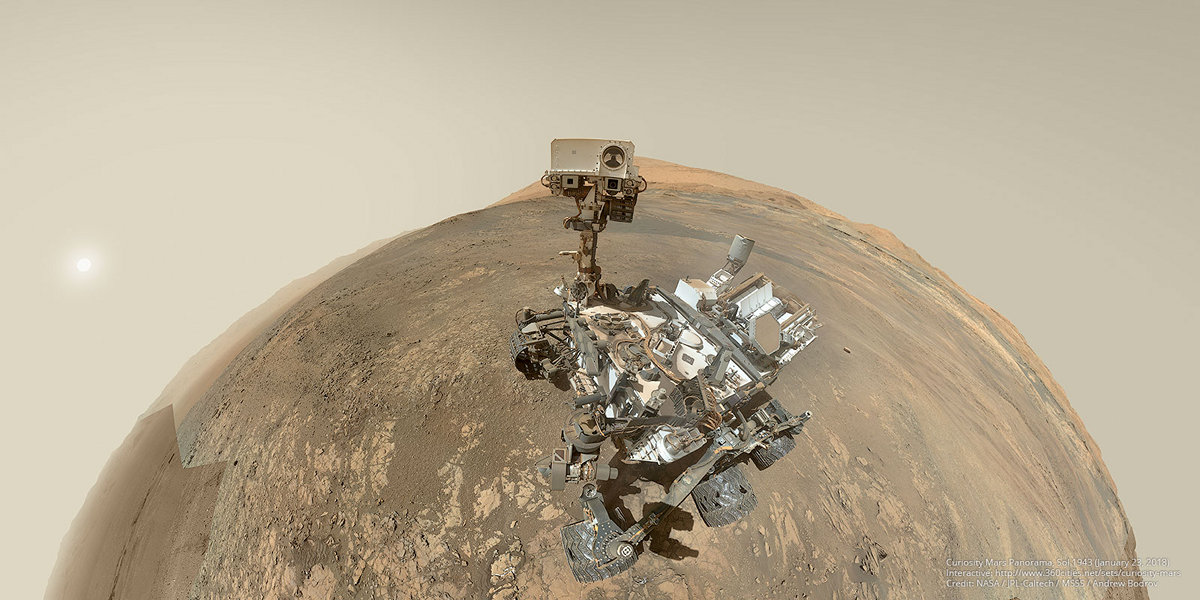 On sol 1943 of its journey of exploration across the surface of Mars, the Curiosity Rover recorded this selfie at the south rim of Vera Rubin Ridge. Of course a sol is a Martian solar day, about 40 minutes longer than an Earth day. Curiosity’s sol 1943 corresponds to Earth date January 23, 2018. Also composed as an interactive 360 degree VR, the mosaicked panorama combines 61 exposures taken by the car-sized rover’s Mars Hand Lens Imager (MAHLI). Frames containing the imager’s arm have been edited out while the extended background used was taken by the rover’s Mastcam on sol 1903. At the top of the rover’s mast, sitting above the Mastcam, the laser-firing ChemCam housing blocks out the distant peak of Mount Sharp.

from NASA http://ift.tt/2EbPy23
via IFTTT

By chance, a collision of two galaxies has created a surprisingly recognizable shape on a cosmic scale, The Cartwheel Galaxy. The Cartwheel is part of a group of galaxies about 500 million light years away in the constellation Sculptor. Two smaller galaxies in the group are visible on the right. The Cartwheel Galaxy’s rim is an immense ring-like structure 150,000 light years in diameter composed of newly formed, extremely bright, massive stars. When galaxies collide they pass through each other, their individual stars rarely coming into contact. Still, the galaxies’ gravitational fields are seriously distorted by the collision. In fact, the ring-like shape is the result of the gravitational disruption caused by a small intruder galaxy passing through a large one, compressing the interstellar gas and dust and causing a a star formation wave to move out from the impact point like a ripple across the surface of a pond. In this case the large galaxy may have originally been a spiral, not unlike our own Milky Way, transformed into the wheel shape by the collision. But … what happened to the small intruder galaxy?

from NASA http://ift.tt/2DB4lGF
via IFTTT 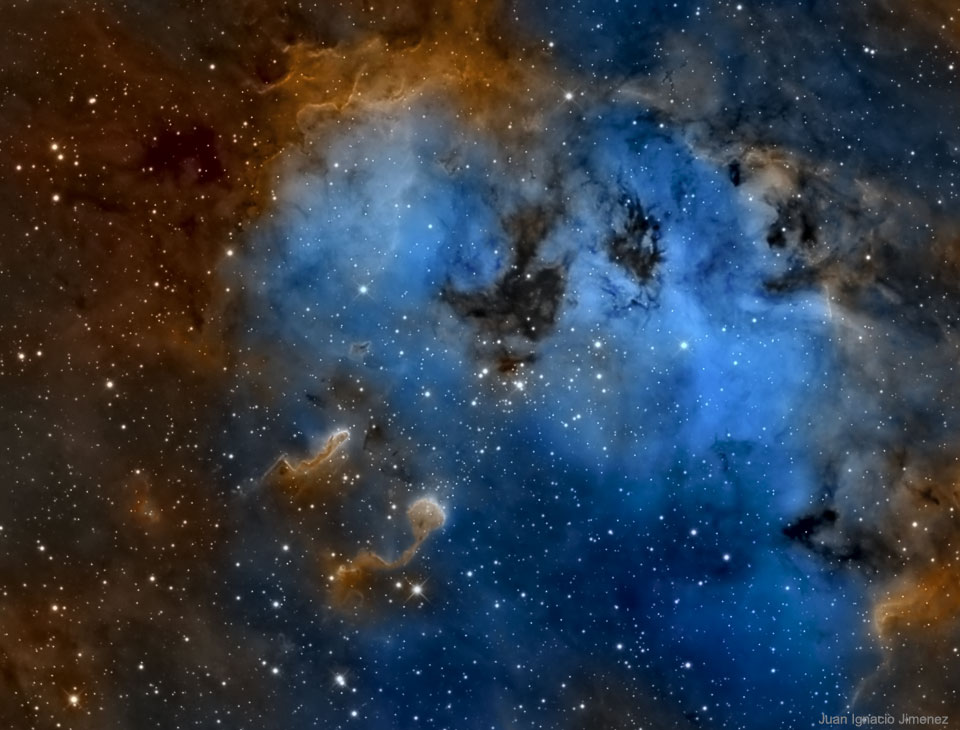 This telescopic close-up shows off the otherwise faint emission nebula IC 410. It also features two remarkable inhabitants of the cosmic pond of gas and dust below and left of center, the tadpoles of IC 410. Partly obscured by foreground dust, the nebula itself surrounds NGC 1893, a young galactic cluster of stars. Formed in the interstellar cloud a mere 4 million years ago, the intensely hot, bright cluster stars energize the glowing gas. Composed of denser cooler gas and dust, the tadpoles are around 10 light-years long and are likely sites of ongoing star formation. Sculpted by winds and radiation from the cluster stars, their heads are outlined by bright ridges of ionized gas while their tails trail away from the cluster’s central region. IC 410 lies some 10,000 light-years away, toward the nebula-rich constellation Auriga.

from NASA http://ift.tt/2rzAQPL
via IFTTT

Why do some spiral galaxies have a ring around the center? Spiral galaxy NGC 1398 not only has a ring of pearly stars, gas and dust around its center, but a bar of stars and gas across its center, and spiral arms that appear like ribbons farther out. The featured image was taken with ESO‘s Very Large Telescope at the Paranal Observatory in Chile and resolves this grand spiral in impressive detail. NGC 1398 lies about 65 million light years distant, meaning the light we see today left this galaxy when dinosaurs were disappearing from the Earth. The photogenic galaxy is visible with a small telescope toward the constellation of the Furnace (Fornax). The ring near the center is likely an expanding density wave of star formation, caused either by a gravitational encounter with another galaxy, or by the galaxy’s own gravitational asymmetries.

from NASA http://ift.tt/2G3GXiy
via IFTTT 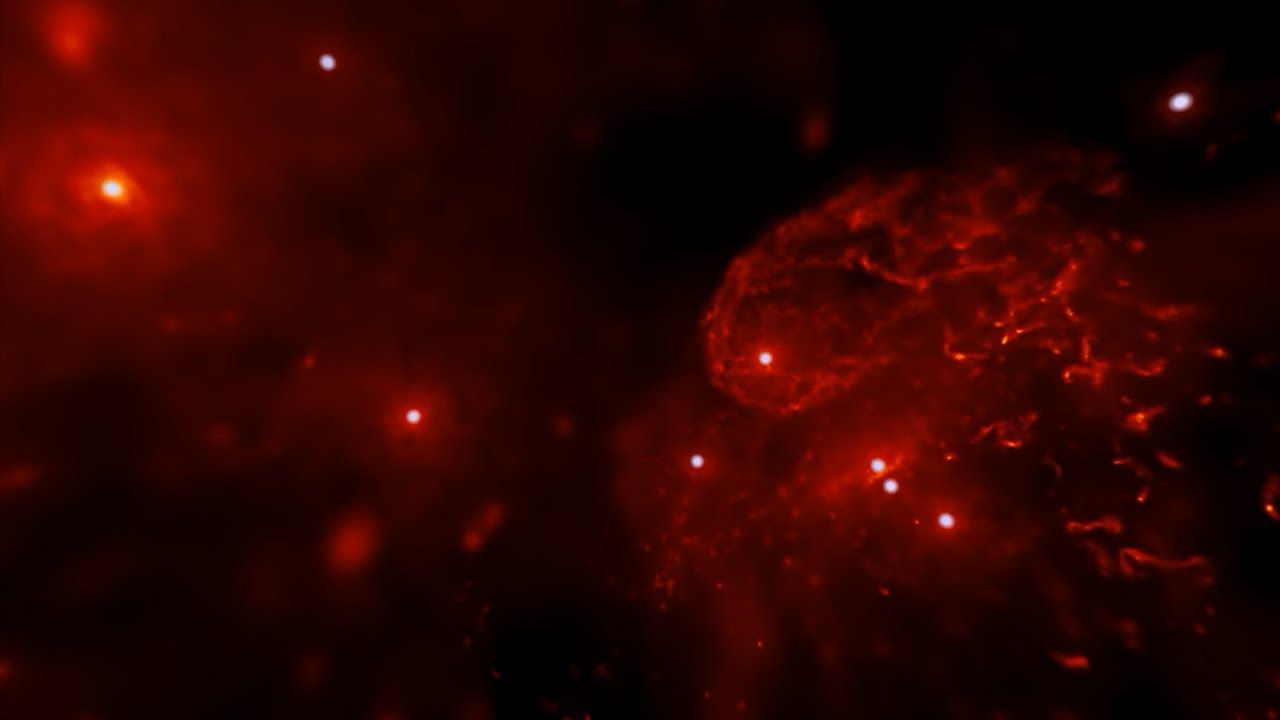 What if you could look out from the center of our Galaxy — what might you see? Two scientifically-determined possibilities are shown in the featured video, an immersive 360-degree view which allows you to look around in every direction. The pictured computer simulation is based on infrared data from ESO‘s Very Large Telescope in Chile and X-ray data from NASA‘s orbiting Chandra X-ray Observatory. As the video starts, you quickly approach Sgr A*, the supermassive black hole in the Galactic center. Then looking out, this 500-year time-lapse simulation shows glowing gas and many points of light orbiting all around you. Many of these points are young Wolf-Rayet stars that have visible hot winds blowing out into surrounding nebulas. Clouds approaching close become elongated, while objects approaching too close fall in. Toward the video’s end the simulation repeats, but this time with the dynamic region surrounding Sgr A* expelling hot gas that pushes back against approaching material.

from NASA http://ift.tt/2BhIheh
via IFTTT 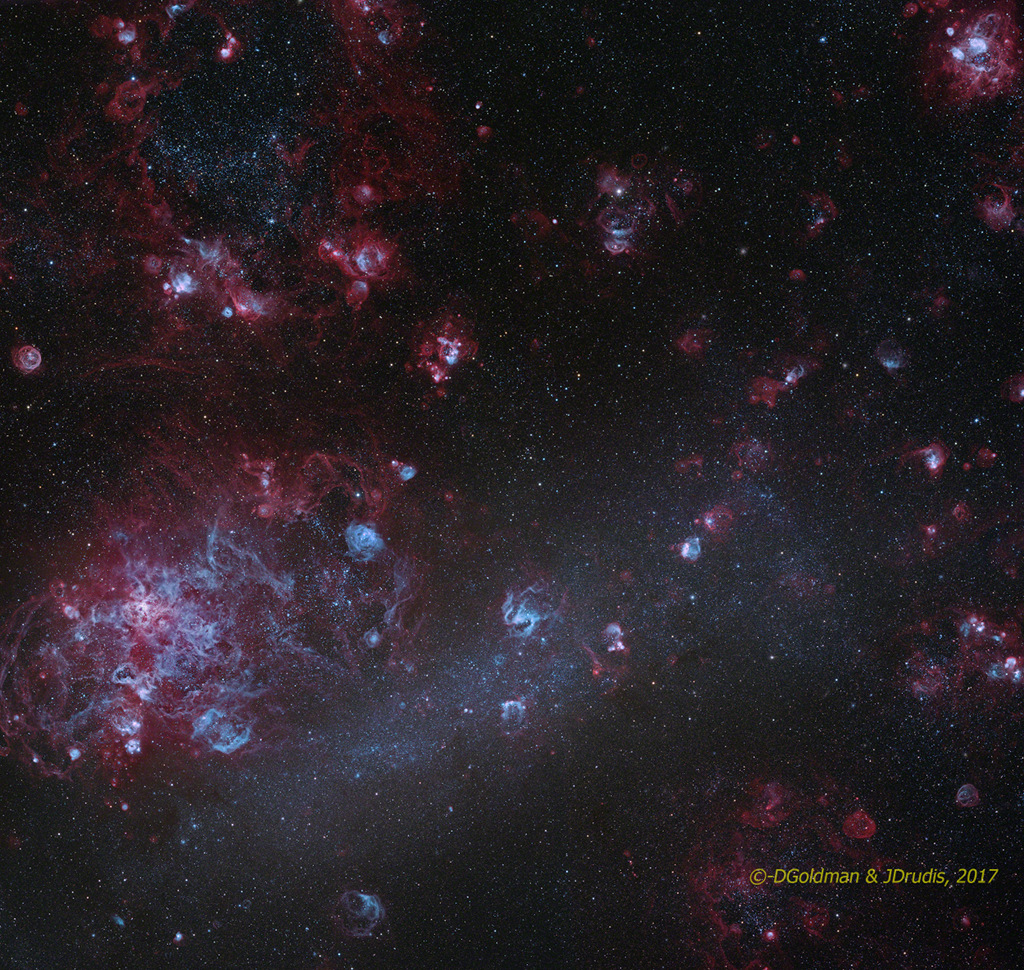 An alluring sight in southern skies, the Large Magellanic Cloud (LMC) is seen in this deep and detailed telescopic mosaic. Recorded with broadband and narrowband filters, the scene spans some 5 degrees or 10 full moons. The narrowband filters are designed to transmit only light emitted by hydrogen, and oxygen atoms. Ionized by energetic starlight, the atoms emit their characteristic light as electrons are recaptured and the atoms transition to a lower energy state. As a result, in this image the LMC seems covered with its own clouds of ionized gas surrounding its massive, young stars. Sculpted by the strong stellar winds and ultraviolet radiation, the glowing clouds, dominated by emission from hydrogen, are known as H II (ionized hydrogen) regions. Itself composed of many overlapping H II regions, the Tarantula Nebula is the large star forming region at the left. The largest satellite of our Milky Way Galaxy, the LMC is about 15,000 light-years across and lies a mere 160,000 light-years away toward the constellation Dorado.

from NASA http://ift.tt/2Dm6ENt
via IFTTT Stars of the Hyades cluster are scattered through this mosaic spanning over 5 degrees on the sky toward the constellation Taurus. Presently cruising through the Solar System, the remarkably blue comet C/2016 R2 PanSTARRS is placed in the wide field of view using image data from January 12. With the apex of the V-shape in the Hyades cluster positioned near the top center, bright Aldebaran, alpha star of Taurus, anchors the frame at the lower right. A cool red giant, Aldebaran is seen in orange hues in the colorful starfield. While the stars of the Hyades are gathered 151 light-years away, Aldebaran lies only 65 light-years distant and so is separate from the cluster stars. On January 12, C/2016 R2 was over 17 light-minutes from planet Earth and nearly 24 light-minutes from the Sun. Its blue tinted tail largely due to CO+ gas fluorescing in sunlight, the head or coma of the comet appears with a slightly greenish hue, likely emission from diatomic carbon.

from NASA http://ift.tt/2DhAx1n
via IFTTT